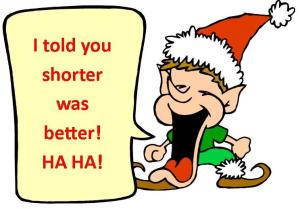 Back in broadcast journalism school, I was taught that the shorter and simpler the sentence structure, the better. Subject-verb-object ruled the day. Semicolons were verboten. I was told to count the words in my sentences to make sure I had no more than twenty words in each. (I’ve since heard the new rule is ten words per sentence. Yikes.) It made sense to keep sentence structure simple because we were writing for the ear – and a pretty distracted ear at that, given that the audience is probably either getting the kids off to school or driving to work in rush-hour traffic, with the radio as background noise.

Now that I write fiction, my sentence structure has gotten a little more involved. Narrative passages replete with adjectives and adverbs are fine (although I still try to go easy on the adverbs, preferring active verbs instead). I might even throw in a modifying clause here and there. But I find that short, punchy, subject-verb-object sentences still have their place.

But if you want to move the action along, the use of short sentences will help your reader race through to the end. Like this:

The timer counted down. He scanned the wires attached to the bomb. Every second counted. He wiggled the green one. She shrieked in alarm. He clipped the orange one instead. The timer stopped. She sagged against him in relief.

Conversely, you can also use short sentences to signal the passage of time:

Jerry stood on Mrs. McGillicuddy’s front porch. He rang the bell, and waited. No answer. He pushed the bell again, and waited. Still no answer. Could the bell be out of order? He knocked. Now he heard a dog barking inside, but still no one came to the door. After another moment, he gave up. But just as he turned to take a step off the porch, the door opened.

Here, the short sentences almost punctuate the scene. The commas after “bell” and “again” also help to slow the reader down; they’re not necessary in terms of grammar, but they help to stretch things out by making the reader pause just that extra little bit.

Of course, short sentences work great for snappy dialogue, too. Think of an old screwball comedy, where the dialogue comes fast and furious and the laughs roll in, one on top of the other – like in this scene from “Some Like It Hot”:

So when you’re slapping your story into shape, don’t forget: shorter can be sweeter.

33 thoughts on “In Defense of Short Sentences”