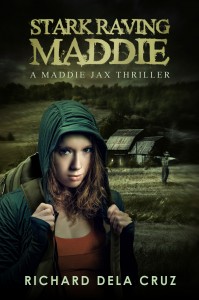 Sixteen-year-old Maddie Jax has only one thing on her mind: save her younger sister from a sexual predator. The plan was simple: take a cross-country bus ride, confront the creep, and rescue Amy.

When Maddie gets booted off the bus two thousand miles short of her destination, she accepts a ride from a stranger. But things go wrong, and she finds herself trapped inside a creepy basement lit by one flickering lightbulb. It doesn’t take her long to realize that time is running out, not just for Amy, but for herself as well.

Stark Raving Maddie is available for Kindle and in print from Amazon.com, Barnes & Noble, and Amazon UK.

Hank looked doubtful but he didn’t argue with his brother. He placed his hand behind him and turned the knob. Both men kept their eyes on the twelve gauge as they backed out of the store and closed the door. All the while, Otis never let them out of his sight, regardless of where his eyes actually pointed. The shotgun remained ramrod straight the whole time.

“Not to sound ungrateful,” Maddie piped up as soon as they left. “But it would’ve helped if those two bled to death from buckshot.” She folded her arms. “That’s peace of mind we all could’ve used.”

Otis said nothing as he walked up to the door and locked it. For added security, he placed a bar across the door. He then lowered his weapon and turned to face Maddie.

“The Battle of Khe Sanh pretty much spoiled mah appetite fer killin’,” Otis told her. “Now lemme ask you: Didja ever kill anyone?”

“You go on and give it a try sometime,” Otis said as he walked over to the office door. “See how it goes and then you come back and give me yer damn lecture.”

He unlocked the office door and walked in while the girls followed. The walls were filled with fishing photos and other memorabilia. Right near the window was a banged up wooden desk with an old style black phone on one corner.

Alicia rushed towards the phone, pressed the handset against her ear, and began punching numbers. “It’s not working! The buttons are all weird!”

Maddie closed her eyes and did a facepalm.

“It’s a rotary phone,” she mumbled through her fingers.

Alicia moved the handset away from her ear. She looked at the mouthpiece and frowned. Otis shook his head, grabbed the phone from her, and dialed 911. He placed it on his ear and listened. His wide trout eyes instantly grew wider.

“Slap mah face and shit me a hedgehog!”

“What now?” Maddie asked him.

Otis banged the phone down hard on the cradle. The bell inside jingled from the impact. He reached down and brought up his shotgun, ready to shoot. Startled by his movement, Alicia backed away from him.

“Somebody done cut the line.” Otis narrowed his eyes.

“You mean the somebody you just let go?” Maddie said.

He pointed a finger straight at her. “Don’t you start with me, girlie.”

The sputtering sound of an old engine came from outside the shop. The engine coughed for a few seconds and then groaned to life. Otis gave a cry of surprise and rushed out the office. Maddie and Alicia followed right after him. He pulled up the window shades and, as he peered out into the darkness, a blinding pair of high beams flooded the front of the store. He raised his hand to shield his eyes, a hunched silhouette bathed in the spotlight.

The engine revved; the headlights came closer. The truck smashed through the entrance with a savage violence, shaking the entire store, shattering glass, splintering wood. Otis yelled as the cursive Ford logo came straight at him. The old man flew backwards and landed on a pile of sharp lures and broken glass. Alicia screamed as she ducked and covered her head. Maddie fell on her side and shielded her face with her arms as tiny debris came flying at her.