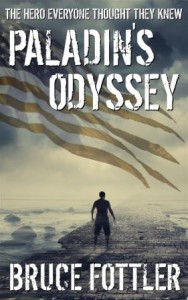 Joseph Paladin is a national hero everyone thought they knew – a former major in the United States Army, retired colonel in the Maine Republic Militia, and considered one of the key founders of the New American Confederation. His legendary odyssey to reunify a fractured nation in the aftermath of the great flu pandemic is a household story. In his long awaited memoir, Paladin shares untold stories of his past, including a shocking secret that he’s harbored for decades. Is he really someone who should be held in such high esteem?

Paladin’s Odyssey is available on Amazon.com and Amazon UK.

“Can I show you something?” Glenn asked me in a low voice.

Glenn rose and gestured for me to follow him. We walked across the campus to a section that I thought wasn’t in use. We approached an old building that had vines growing up over it. He led me to a side door and pried it open. We squeezed in before he closed it behind us. It took a minute for our eyes to adjust to the dim lighting that leaked in through the vine-covered windows.

“This way,” Glenn beckoned as he continued deeper into the building. Soon we entered a large room at the back. It extended for the length of the building and was illuminated by a number of large picture windows. Rays of sunshine glinted off particles of dust that floated in the air. A slight musty smell mixed with a number of other odors, which mostly reminded me of a new car smell. The cavernous room was jammed full of boxes, crates, and furniture.

“I stumbled on this last week. There are three more floors above us crammed full of the same sort of stuff.”

“Tony’s bounty that he keeps off the books. Just look at it all!”

It was difficult to take in at once, and not unlike one of those old television reality shows about hoarders. Except this was on a far larger scale. There were only a couple of narrow pathways to navigate through the mess.

“There’s a row of microwaves over there,” Glenn continued as he pointed around, “an assortment of flat screen televisions toward the far end, camping equipment, toothbrushes, auto parts; it just goes on and on. I’ve only briefly looked it over and there’s no sense of order to anything. It looks like it was just tossed in here as it was unloaded.”

I took a couple of minutes to wander around, trying to process it all. Most of what I saw was an overwhelming mess of contradictions because many items I observed could no longer be used.

“Does he think the old world is coming back sometime soon?” I wondered. “Most of this stuff is useless.”

“I’m sure it underscores the mental illness we always suspected he has, but I did find some things that can be used. It’s enough to make you wonder what else is buried in here. It’ll take weeks to go through it all.”

“There are cases of toilet paper over there we could liberate, sitting on top of those washing machines.”

“You know we can’t touch any of this.”

“Why not? This place is a complete mess. He couldn’t possibly notice if we took a few things here and there.”

“Do you really want to play that game with Tony?” I cautioned.

What Glenn suggested was tempting, but it was also playing with fire. Tony had a lot of laughable traits, but ultimately, he was ruthless when crossed. Both of us were keenly aware that neither of us was indispensable. I doubt Pat would’ve said anything if we suddenly disappeared at Tony’s decree. Things like that already occurred with unsettling regularity.

“We just can’t walk away without doing something about it,” Glenn retorted. “All of this represents everything that’s screwed up with the BSA. Don’t you want to make things better?”

“Yeah, but we need to stay alive to make things better.”

Glenn stewed silently. I understood his frustration. It was too easy to take rash action in those days. Many tried; most had failed.

“Look, let’s just pull back and think about this for a while,” I calmly suggested. “We have some time because I can’t see how any of this stuff is going anywhere soon. There’s no way Tony could move it all without a lot of people noticing.”

“Yeah,” Glenn reluctantly conceded. He drew in a deep breath and took one last look around. That’s when I noticed a peculiar, crooked smile surface on his face. I’d never seen it before, but I have several times since. I had unknowingly planted a seed of resolve in him, which was funny because all I was trying to do was put him off from doing something rash. I thought he just needed some time to cool down so that whatever bold ideas that ran through his mind at that moment would melt away. I had no idea that I had supplied the first spark which would smolder for a while, but later ignite a firestorm of changes.