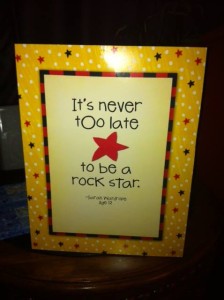 When my Andy Warhol appointed fifteen minutes happened back in 2012 and my book was topping the charts, I didn’t have to look for promotion opportunities. They found me. I was asked to give interviews, guest blog, even teach courses on how to self-publish. Some of those efforts helped me connect with readers and some did not. Among the requests I received was an email from a woman in Moulton, Alabama asking me to send her a print copy of my book. Sending out print books can be expensive and you often wonder whether it’s worthwhile. When my moment in the sun was shining so brightly that I could hardly see, I didn’t have time to research every opportunity that came my way. I just kept saying “yes”.

The woman in Moulton claimed to be a reviewer for a number of small newspapers in the area. She’d read the blurb of my book, saw that it was doing well and wanted to read it. But, she wasn’t interested in any of those eBook thingies. She wanted a print book. I suppose I could have got on the Google (as I heard it said recently) to verify her identity, but I didn’t have time for that. I was busy watching my dashboard change every copy of My Temporary Life I sold. So, I sent out the print version. And, I waited for something to happen.

If you can manage it financially, then it’s a chance you should take. If you publish through Createspace, you can send the book directly to the person who requested it. Or, if they insist on a signed copy, you can send it from home. I’m in Canada and to send from here to the United States can be expensive. Fortunately, I live quite close to the US border so I can cross over and ship from within the states. There is a flat rate five-dollar fee to ship books within the U.S. so that keeps the cost down. Shipping within Canada to a Canadian address is about the same cost but in Canadian dollars.

As my fifteen minutes were ticking away I also had a request from a publisher. They contacted me and asked for an eBook of My Temporary Life. This was unusual because the previous weekend, right before my moment in the sun, I had taken another chance by running a free promotion, giving away 50,000 eBooks. (I’m still a fan of free and am running it free again on February 11th.) I sent them a copy anyway. Again, I waited.

There were other requests. I was invited to participate in a book with several other authors. The money was to benefit women in transition houses. I agreed and submitted a chapter. And again, I waited.

If any of you have experienced the same fleeting moments of incredible sales that I have then you know what can happen. I was one of the early authors who ran a free promotion and then afterward took advantage of a lot of paid sales. My book went up the rankings, got a pile of positive reviews, and I made some money. But, then the cliff happened. It stopped. It took a little while but things went back to normal. It was then that I had a chance to analyze whether any of my efforts had been worthwhile. After three weeks I had had no confirmation from the publisher that they’d received the requested copy of my book. After emailing them, they sent me a form email telling me that they would be back to me in twelve to sixteen weeks. We decided to just be friends and I told them I’d just keep doing what I’d been doing.

The inspirational book I contributed a chapter to was finally published. I tried and tried to determine whether any money reached the folks that had been promised, but I got tired of going in circles and decided that next time I’d go to the source of the need and donate my efforts directly. My adventure with my new friend from Moulton, Alabama however, was just beginning.

Two weeks after mailing the book I received a very nice email. Fortunately she was quite taken with my book and even suggested several well-known actors who could play the title role in the movie version. And she sent me a link to an article she wrote for a newspaper – an article about me and my self-publishing story, and my book. Then, she sent me the link to another article she wrote about me. And then another. Then she mailed me the newspaper clippings. Shortly afterward I received a couple of emails from folks in the Moulton area who had read the articles and checked out my book. They wanted to know of any other books I’d written or planned on writing. A couple of Amazon reviews appeared, written by readers who cited the Alabama articles. When I released my next book, I sent a copy to my new friend in Alabama immediately. She also enjoyed My Name Is Hardly. Positive reviews and emails from readers in her area followed, as well as suggestions regarding who should play the protagonist in the new novel. A year later she helped put together a writers’ festival in her area and invited me to participate. Unfortunately, family circumstances wouldn’t allow me to travel but I appreciated the invitation.

We’ve become friends. I tell her what I’m writing and what I plan on writing. And when I released my newest novel, The Dead List, I sent her a print copy. It’s impossible for me to gauge how many readers have been exposed to my work because of her, but I know it’s significant. She’s been a tremendous help to my confidence as well as sourcing out ways to reach readers, and if Paramount studios ever call it wouldn’t surprise me if they cited her name and said she’d contacted them. It’s a chance I’m glad I took. I’ve gained a good friend who believes in my work.

23 thoughts on “How This Author Became a Big Deal in Moulton, Alabama”