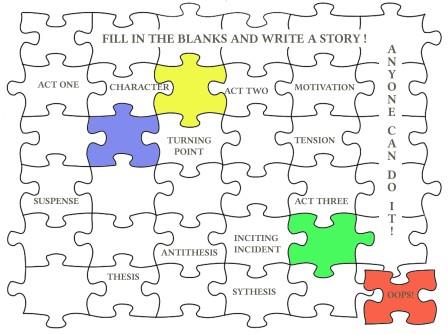 The structure of every story follows the pattern of the average human emotional experience. That pattern is the same, whether it’s a first kiss, eating a chocolate bar, having sex, or reading a full-length novel. Hollywood scriptwriters have found this pattern, follow it, and often make great heaps of money for their producers by doing so.

But how does this help the novel writer? We’re all much more “seat of the pants,” aren’t we? Creative, innovative, never following the crowd? Well, yes, we all have an intuitive grasp of the idea, or we wouldn’t be writers. But my experience is that a formula helps you most when you discover you’ve screwed up. Be as creative as you want, but when you finish your first draft and discover it’s flat, boring, and takes too long to get anywhere, what do you do? You go to the formula to see what you missed. Because it will be there.

My favourite crutch at times like that is Blake Snyder’s Save the Cat. Candace Williams took a page from this book for her article on Storyboarding, and now I’m going to refer to the same hallowed tome for information on story structure. Blake Snyder has honed the structure of the fiction experience down to a fine edge, even stating the page number where each event must take place in a 110-word screenplay.

Now, we’re not pitching to Hollywood producers, so we have a bit more latitude, but when I analyze a manuscript with problems, I always find that it misses its marks on Snyder’s plan. Here’s his pattern in simplified form (without the page numbers to stir up your righteous ire).

If somehow you’ve managed to include all this, you’ve got the bones of a good story. And if you’ve missed even one of these, you’d better go back and put it in, because your story will be lacking.

Invest in Your Craft

If you want a reference that you can go back to time and again, that you can turn to whenever you have a problem, go out and buy Save the Cat, or one of the other how-to books on story writing, such as Plot & Structure by James Scott Bell. (His pattern is called LOCK: Lead, Objective, Confrontation, Knockout.) Outlining Your Novel by K. M. Weiland has good information, but I think he spends too much time selling you on the idea instead of telling you how. Buy one. You won’t be sorry.

I perused about a dozen other how-to books on novel writing, and I found they all broke the primary rule of plots. Instead of giving us the facts about writing, they talked about it, round and round: the theoretical, “What is Plot?” the cutesy, “What is the Who?” the highly detailed, “Basic Writing Ability, Natural Storytelling Talent, and The Right Temperament.”

If you spend too much time reading books like that, you’ll end up with the same problem they have: the academic approach. You’ll learn to write round and round, telling all about the story, without ever showing it.

And stay away from the cutesy titles. “How to Write a …(superlative adjective)… Book in …(unrealistic number)…of Days…(deleted expletive)!” These are books written by marketing experts making money off writers.

You don’t need all that theoretical stuff. You need to start writing. And if you use a simple template that is based on the emotional experience your reader will go through, you’ve got that much better chance of making a hit.

14 thoughts on “Story Structure: All a Novelist Needs to Know”