In part one of this article, I discussed InstaFreebie, the site that lets you give away a book for free in exchange for the person’s email address, in order to grow your mailing list. I also mentioned I ended up with almost 2,000 new names on my mailing list because of InstaFreebie promos I participated in.

I was very excited to get the new names, but a little hesitant, because people signed up for the list with the express purpose of getting a free book. We’ve all signed up for lists we’re not interested in to get something free (well, at least I have). Given that, I was concerned I’d have a 50 percent unsubscribe rate, or some ridiculous number, because people didn’t want to be bothered with additional emails. It didn’t help that a few of the email addresses indicated the person was giving me a junk address — stuff like StraightToSpam@whatevermailingservice.dot.

I decided to test out my new subscribers to see what happened. As I mentioned in the first article, I was getting 4 to 5 subscribers a day initially. After three days, I did a test email to 13 subscribers, got 9 opens and 1 unsubscribe. Not bad for a small list.

Then I did the Rebecca Hamilton group promo which netted me 1,100 subscribers. To test the waters, I sent them a mailer welcoming them to my list, offering them a chance to unsubscribe, and mentioning I had a perma-free short story, Almost Perfect. About 90 minutes after I hit send, I happened to check my KDP Dashboard, and since the mailer had gone out, I had given away 92 copies of Almost Perfect. This was highly unusual, because Almost Perfect is a really short story (1,800 words) and only gets about 2-3 downloads per day (most people aren’t short story fanatics). So that was really surprising. With that news in hand, I went to check the open rate. At that point, the email had 243 opens (22 percent) and 141 clicks.

There were 7 bounces and 15 unsubscribes. That seemed pretty decent for an hour and a half. I’d sent the email at 5 pm. By the next morning (9 am), Almost Perfect had 266 downloads and an Amazon rank of 2,249 in the free store (The rank had been hovering around 19k prior to the mailing). It was at No. 2 in short reads for science fiction. And someone had left a 4-star review on the story.

Most people who were going to open the email had opened it by the 24 hour mark. On a mailer that went to 1,100 new subscribers, I had 669 opens, 435 clicks and 37 unsubscribes. I went ahead and checked the stats a week later, and it had a total of 797 opens, 526 clicks, 8 bounces and 45 unsubscribes. MailChimp says the industry open rate is 17 percent, so getting a 70 percent open was pretty good. The 45 unsubscribes wasn’t bad in the grand scheme of things.

With my first mailer, I determined that the names from the list would open an email touting something free and readily download it. My next question was, would they pay for stuff I was offering? To figure this out, I sent out an e-mail September 20 to 2,486 subscribers to mention my book Concealed was on sale for 99 cents. Because I knew I’d picked up most of the subscribersbecause they wanted free things, I thought I’d try to goose the open rate by offering something free. However, I didn’t have anything else free to give. I turned to Yvonne Hertzberger, whose Back from Chaos is a perma-free lead-in to the rest of her series. I asked her if it was all right to list the book on the date of my mailing (I didn’t want her to have some other promotion scheduled and then not be able to figure out what had caused an uptick in downloads). She agreed, and the subject of my mailing was, Concealed 99 cents + a FREE book. 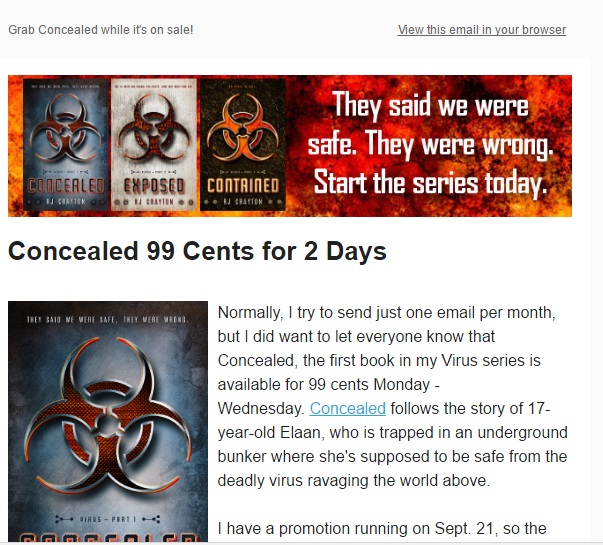 Obviously, people like free best. Yvonne’s book got about 500 clicks, whereas the Concealed 99 cent link only received 150 clicks. That’s based on day-one stats. Based on that first day’s stats, Yvonne got about 300 downloads at Amazon and I made 35 sales of Concealed, which is exclusively at Amazon. This was a good number for me, as I’ve done paid 99 cent promos that haven’t netted me 35 sales. In terms of that, the mailing list was really good. Unfortunately, the open rate fell off a lot, and I’m not sure why. The mailer went to 2,486 subscribers (via two different mailing services; as I was testing an alternative to MailChimp). After 24 hours, only 1,078 people opened the emails, and 24 people had unsubscribed. That’s a 43 percent open rate and about 1 percent unsubscribe (for the total mailing; 2.2 percent for just the opens). It’s better than the industry rate, but lower than my previous mailings. I went back and checked the numbers again on Sept. 30, 10 days after the mailing. The open rate was 1,298 opens and 32 unsubscribes. That meant a total open rate of 52 percent and an unsubscribe rate of 1.3 percent (for the total mailing; 2.5 percent for just the opens).

I was a bit bothered by the fact that only about half the people opened the email. My smaller, organic growth list generally maintained an open rate of about 70 percent, so I was used to more engagement, but with smaller numbers. The good news is, I have discovered that most mailing services allow you to segregate the people who didn’t open your emails at all. In the future, I can focus my efforts on those who are most engaged, and eventually cull the list. (As an aside, an author in an online group I’m in suggested emailing people who haven’t opened several emails to see if they still want to be on your list. If they reply, keep them, and if they don’t, drop them. Because most mailing services charge by the total number of subscribers, it’s cost effective to take people off a list if they aren’t opening. However, some people set their mail not to record or send open data to mailing services, so that’s why emailing them first is crucial. You don’t want to remove an active subscriber who simply enjoys data privacy.)

Overall, I was pretty happy with the results of my mailings from subscribers obtained via InstaFreebie. Even if I’m only getting half of the people as engaged subscribers, it’s still way more individuals than I was getting on my own. There weren’t a ton of drawbacks to InstraFreebie mailings. But I will note two. The first is something that might happen with any promotion. The mailing skewed Yvonne’s Also Boughts for book Back from Chaos. A big chunk of my InstaFreebie signups came from a multi-author promo organized by Rebecca Hamilton. Well, two of Hamilton’s boxed sets and my Concealed now appear on the first page of Back from Chaos’ Also Boughts, while books two and three of Yvonne’s series were pushed to page two of the Also Boughts list.

The other concern is not one I’m personally having, but one that was mentioned in an online group I’m in. Mailing services frown upon senders who have a high rate of unsubscribes/spam reports and may suspend or terminate such accounts. The mailing service does this because they don’t want to get tagged by big webmail services (Gmail or Yahoo) as spammers. I haven’t had any trouble, but one author mentioned that her account was briefly suspended after she sent a campaign to subscribers that came through InstaFreebie and had a higher than normal unsubscribe rate. She was able to explain how InstaFreebie works and that this was her first time mailing to those subscribers and her account was reinstated. Again, I don’t know the specifics, so it’s possible there were other reasons the author’s account was suspended, ones I’m not privy to. However, I did want to note that as an issue.