Today, author Vickie Johnstone offers us a sneak peek at one of her new books in her acclaimed “Kiwi” series.

In book three, “Kiwi and the Living Nightmare,” the story begins with Amy, James and their little black cat tucked up in their beds on the week of Halloween. They all dream of a strange house in the woods in which resides a grey, three-legged cat, who begs them to help her. So, off the budding detectives go in search of the place, but inside they encounter something spooky… something that will do anything to stop them leaving.

This delightful book is for adults, teens and children aged 10 up. Here is an excerpt from Kiwi and the Living Nightmare: 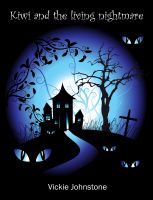 “Ok,” said James, looking back at the window. The animals in the stained glass remained still. Cats, a forest, birds and a lake. Very colourful and beautiful. The cats had happy, smiling faces, the forest was very green, the lake sparkled in the sun and even the birds looked happy. All of them were robins with little red breasts.

“Come on,” said his sister. “We’re probably just a little bit tired. Maybe we can have a nap upstairs. There are bound to be lots of beds in this big house.”

James’ eyes lit up. Sleep. Yes, he could do with a nap after all of that walking and some munchies. He stopped and fiddled with his rucksack seeking… chocolate. What else? He grinned and grasping the silver-wrapped bar in his hand, he scampered after the others.

“Hope you’ve got one for me!” whispered Amy.

“Of course,” grinned James. “I’ll find one when we get up there.”

Kiwi had stopped on the stairs for them to catch up. A thick, green carpet trailed up the staircase, which was made of a very dark wood. Most of the wood in the house looked old and heavy, and dark. The wallpaper was quite expensive looking, and looked like drawn swirls of red on a white background. Looking closer, Amy could see that there were thousands of branches with little birds hopping around. The lady of the house sure liked nature and animals. Amy guessed she would have liked her.

“What was that?” whispered Amy, stopping dead in her tracks. “Was that you joking around?”

“No hmph,” mumbled James, trying to speak through the sticky chocolate in his mouth.

“It wasn’t me either,” mewed Kiwi. She looked up, but there was nothing to see. “Maybe it was your imagination… it has been a long day…”

“Maybe,” whispered Amy, looking back down the stairs. The hallway was empty.

Whooooshhhhh, a cold chill of air rushed past them. Amy hugged her arms around her waist. The hairs on her neck stood on end. “You must have felt that!” she whispered, her eyes wide.

James pushed the remains of his chocolate bar into his pocket and wiped his mouth with the back of his hand. Something cold had rushed past his hands. He rubbed them together. “What is it Kiwi?”

The little black cat stood still with her ears pricked up. Her tail stood on end. She sniffed the air. It was warming up again. Whatever it was had rushed up the staircase. “Maybe we should go back?” she said softly.

Suddenly, a heavy breathing sound could be heard, right in front of them on the next step up. Amy jumped and James banged into her. She gripped her brother’s hand tightly. Kiwi backed into them, protecting them as she looked around. There was nothing on the staircase. But the breathing continued. It was low and heavy, but unmistakeably there. Was the house haunted?

“This is a little bit scary,” whispered James, forgetting that he was trying to be like James Bond whenever they went on an adventure with Kiwi.

Kiwi winked. “Let’s go back down…”

But, before they could turn around another blast of cold air rushed between their legs. Kiwi’s fur stood on end and she shivered slightly. Suddenly everything went dark.

“Look!” James pointed to the window right by them on the staircase. Outside, it was night-time. The sunshine had disappeared all of a sudden, like a light being switched off, and there was solid darkness out there. No stars, no moon, just black night. The whole house took on a different look. It seemed cold and spooky. The hallway and the stairs were dark, but they could see just about. The dark wasn’t complete.

“Look at the window,” pointed Amy.

In the stained glass window there were no longer smiling cats, but dark shadows with piercing yellow eyes. Instead of robins flying there were dark black ravens. The green forest was now jagged, spectre-like trees and the lake was frozen with black ice. Outside, the wind was beginning to howl.

“Just follow me down the stairs slowly,” whispered Kiwi. “Don’t look at the windows and just follow me very quietly.” The black cat jumped softly down the staircase, followed by the two children. Amy gripped her brother’s hand tightly and pretended that she wasn’t scared at all. Behind her rib cage her heart beat louder and louder. They crept down the steps one by one. In the air the darkness seemed to be getting darker, but they were not sure if it was just a trick of the light. James dare not look at the stained-glass window and the shadowy creatures it now beheld. After what seemed an eternity, they reached the bottom of the staircase, careful not to make a sound, holding their breath and breathing through their noses. Kiwi’s senses were on alert. She sensed that they had to get out of here as soon as possible. Maybe this adventure wasn’t such a good idea. They began to cross the ‘Welcome’ mat with the friendly looking cats.

“Welcome!” boomed a voice as they trod on the mat.

James jumped and looked down and wished he hadn’t. On the mat, the smiling cat faces had become jagged snarls and their eyes glared a bright red colour. Gulp!

“They’re not real,” whispered Amy, noticing where James was looking. “It’s our imaginations.”

Kiwi wasn’t so sure. She looked around.

The voice seemed to come out of the walls. It floated in the empty air around them. Kiwi frowned.

“What or who is it?” whispered Amy.

Kiwi waved her head. She didn’t know. She backed into the children and looked around.

“Follow me!” She mewed and ran towards the corridor. “We must get back to the zebra picture… remember?”

Amy jolted into action and pulled James along behind Kiwi. They charged behind her into the corridor.

“Where are you going? Leaving so soon kitty cat?” shouted the voice, loud and menacing. But it was no longer just a voice. Kiwi skidded to a halt, and James slammed into Amy as she stopped all of a sudden behind their cat. In front of them he roared.

Kiwi and the Living Nightmare is available from Smashwords, Amazon US, and Amazon UK.