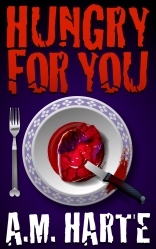 Today we have a sneak peek of A.M. Harte’s book, Hungry for You:

Love is horrible. It’s ruthless, messy, mind-altering, and raw. It takes no prisoners. It chews you up and spits you out and leaves you for dead. Love is, you could say, very much like a zombie. In this haunting short story collection, anything is possible-a dying musician turns to tea for inspiration; a police sergeant struggles with a very unusual victim; a young wife is trapped in a house hiding unimaginable evil…. With “Hungry For You”, A.M. Harte explores the disturbing and delightful in an anthology that unearths the thin boundary between love and death.

Hungry for You is available on Amazon.com, Amazon UK, and other retailers.

And now, from Hungry for You:

The girls lined the street corners in tattered skirts and dusty high heels, midriffs showing, legs cocked jauntily to lure the passing man. Condoms choked the gutter and the sickly sweetness of rot was heavy in the air but still the girls stood there, silent, waiting, hungry.

When the zombie apocalypse began, Sergeant Retta hadn’t expected it to end like this. The stench, the decaying bodies, the shambling gait and inability to speak—that, she had expected. It was the zombies’ hunger for sins of the flesh rather than flesh itself which had come as a surprise.

The girls were pretty, in a half-dead way, their eyes dark and their skin pale, with four limbs and an almost-complete set of fingers and toes. They were well-fed enough to have never progressed past Stage 1 of decay, and now—with their brothers and ugly sisters long buried and the virus easily prevented—these girls lingered on the edges of the city, arms outstretched to welcome their next meal.

Retta eyed the girls with a mixture of revulsion and pity as she drove past. The girls stared back, not at her but at Detective Mortimer, their noses sensitive enough to smell his maleness from miles away. They tracked the car’s progress like sunflowers, faces upturned and yearning, all broken bones and gangrene smiles. But however much they strained forward, the thick chains around their ankles held them in place. These girls were going nowhere.

Retta forced herself to keep looking. These were the girls she’d failed, the ones she hadn’t protected when it’d been her job to stand between them and the plague. It made bittersweet sense that now she was the only one watching out for them. The rest of the force didn’t care. Certainly Mort beside her had the surly expression of a post-tantrum child.

“You’re only killing them,” he said, through mouthfuls of his burger. The baconator, it was called; just looking at it made Retta feel sick. Where other men compensated with sleek cars and large motorbikes, Mort used food. “A man sees us cruise by, he ain’t gonna stop for the zoobs. And with no business, these girls—” he swallowed, drew a line across his neck “—dead. Well, deader than they already are.”

“They never died,” she retorted, scowling. He had a point: that the government turned a blind eye to zombie prostitution didn’t make it legal. Retta took a left at the next intersection and began heading back towards the inner city.

She was at the edge of Dead District, idling at a red traffic light, when she noticed it. A closed door. Anywhere else the sight would have been commonplace—expected, even. But here where only zombies wandered, with no privacy nor home, a closed door was an anomaly.

The light turned green. Retta put her foot on the gas, then stopped, looked at the door again. It was probably nothing.[subscribe2]