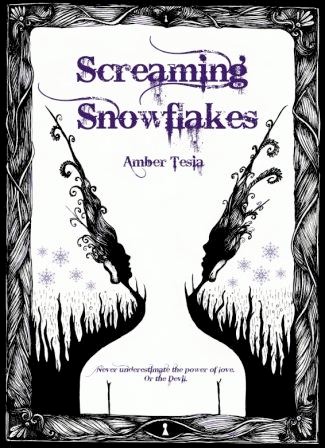 Eleanor is the antithesis of the rebellious Raphael, whose damned and tainted soul threatens her very existence. Unseen supernatural forces conspire to keep the lovers apart, yet nothing can harm Eleanor as she remains under Raphael’s protection.

With an unprecedented alliance between a human and the epitome of darkness can a pure, forbidden love conquer all?

As the boundaries of good and evil become blurred and transgression becomes inevitable, this gripping, thought provoking tale will engage all who have ever questioned love and humanity.

His grave look was in stark contrast to her cheeky grin. His thoughtful eyes continued to rake over her face as he pressed on, ‘What if you could live forever? Someone handed you an elixir which guaranteed eternal life. Would you drink it?’ Raphael’s resolute voice amplified the unusual question.

Eleanor tried to be serious. She answered with a small smile, ‘Hmm, not sure. You’ve got to look at the positives. With eternal life, I assume you’d never be ill?!’

She was teasing him. A sense of urgency crept into Raphael’s determined voice. ‘I’m serious Eleanor.’ He waited for her to respond, his eyes never leaving her face.

Twirling a few strands of hair whilst deep in thought, Eleanor pondered Raphael’s question. ‘Nope, I wouldn’t drink it.’ Shaking her head lightly, she said, ‘I just couldn’t. I’d rather grow old gracefully with my loved ones around me. I mean, what’s the point of a life with no friends or family? It would be an isolated existence. I can imagine it to be a thoroughly lonely time. What about you?’

Raphael continued to stare at her. Something was amiss, Eleanor could feel it. His eyes flashed up at her. He said flatly, ‘I’m no fan of eternal life.’ He continued glaring through the dull window as he continued with conviction. ‘I don’t rate eternal life either. What if-’ His momentary hesitation gave way to terse questions. ‘What if you didn’t have a choice in the matter? What if it was preternatural? Something you were born with?’ He paused for the briefest of seconds and exhaled deeply before saying, ‘And you’re right, it is a lonely place to be.’

Eleanor smiled and shrugged. ‘Well, if it’s inherited, then there’s not really anything you can do about it, is there? And-’

Eleanor’s chatter came to an abrupt standstill. The conversation trailed into silence. Raphael was the most concise person she knew and just a few seconds ago, he had agreed that having eternal life meant being lonely. It suddenly dawned on her what he was saying. Those few moments of self-realisation seemed to take forever to pass, yet weirdly flew by with lightning speed. The confession afforded lucidity as she realised Raphael was immortal.

She didn’t know how long she was silent for. She tried to formulate a sentence but was unsure what to say. Maybe she had heard incorrectly? The procrastinator in her went into overdrive as she told herself she had heard wrong. Of course she had misheard. Because the alternative was too fantastic to contemplate.

What Raphael was saying didn’t make any sense. In fact, it was downright ludicrous. When she finally spoke she said half jokingly, ‘You’re saying… that you’re… immortal..?’

She felt even sillier for saying it out loud. Because immortals didn’t exist. He appeared to be in a state of shock, staring at her with bottomless black eyes tinged with sadness and defiance.

His one syllable confirmation was devastatingly simple.