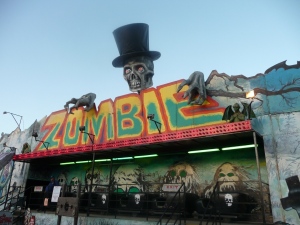 As anyone connected to the horror genre can tell you, we get more than our fair share of questions that boil down to “why do you read/write that stuff?” along with the accompanying nervous sidelong looks and wrinkled nose gestures. And, put on the spot, I’ve always found it difficult to give a reasoned answer, settling for either the glib (“because I’m more twisted than a yoga mom wrestling with a Slinky in a pretzel machine”) or the cop-out (a bewildered shrug). So when Sue Palmer from Book Junkies did me the recent kindness of asking me a far more nuanced and generously-phrased version of that question, I snapped her hand off and wrote down some thoughts. Only, I didn’t actually snap her hand off. That’s a metaphor, thankfully. Here are those thoughts, and I think they come closest to capturing what it is about the genre that attracts me, repels me, keeps me coming back as a reader, writer and even viewer. Well, all this and the euphoric thrill of the carnival ride, too; let’s not forget that.

Horror is the only genre named after an emotion, and a very specific feeling at that. Which is strange when you think about it. I mean, why don’t we call comedy “hilarity”, or drama “alarm”? But this one word doesn’t really do it justice, since we can can experience everything from terror to revulsion to disquiet when reading a horror story. I think this provides a lot more scope than is immediately obvious, and the genre has always suffered from a perception of distaste. Or plain bad taste. Something it has fully and even gleefully embraced on occasion. I think it’s far more rich and varied than the casual reader often assumes, however, and its effects can range from the thrill ride at the carnival to sheer gross-out to a sense of true and deep unease. Escapism? Catharsis? The arguments have raged on that one for centuries.

I wish I could cite just one author as my main inspiration, but I’d have to reel off a list. I suppose Stephen King comes closest, in terms of his dazzling and prolific storytelling ability, although my own stories tend not to lean toward the supernatural as much as King’s do. Clive Barker, for his sheer writing chops, his unrelenting willingness to go places most shy away from and his complex imaginative world-building, would be another.

My own tastes tend toward the darkly psychological and even surreal. If you could somehow meld Barker’s technical wizardry with King’s storytelling and throw in some David Lynch, you might get what I am trying to achieve when I write horror. I suppose the best word to sum that up would be dread. A kind of bleak yet strangely or fleetingly beautiful unease. The agony of that elusive beauty amid the sewer. I am intrigued by exactly how far down that old disused well really goes. And not so much what lives in it but what lives within us when we find ourselves there.

As for modern horror, I think it is currently as diverse as it has ever been. With everything from the Twilight series (not a fan, but each to his or her own) to both American Horror Story and The Walking Dead on television, there seems to be a resurgence in those traditional horror tropes I tend not to be as interested in (zombies are my one exception to this, as they seem almost plausible in a world in which genetic experimentation, environmental disaster and deadly viruses are not only possible but actual realities). And recent horror film is a rich smorgasbord, with incredible 21st Century pickings such as Audition, Let the Right One in, Martyrs, Oldboy, Rec, and hundreds of others I could name here. But I don’t complain about even the more lightweight stuff, as I remember times when the horror genre was brushed under the carpet, treated like the red-headed stepchild of all genre writing, basically looked down upon. For this renaissance, King must take a huge amount of credit. That said, I don’t think a genre that explores some of the darker sides of our nature will ever be accepted by the mainstream, for good or for ill. There will be plenty who see it as exploitative or sensational or even childish, and oddly, some of those same people will laud Shakespeare, Oscar Wilde, the Grimm brothers, Charles Dickens, Henry James, Daphne du Maurier, etc., all of whom wrote horror at some point.

There are so many branches, however: the religion-based terror of The Exorcist is a world away from the transgressive horror of, say, Dennis Cooper or Poppy Z Brite. The late-’80s horror resurgence that gave birth to the so-called splatterpunks (Skipp, Spector, Lansdale) was also the era in which Peter Straub’s literary and darkly imaginative work was ascendant. Or Ramsey Campbell’s near-hallucinogenic nightmare visions of urban decay. John Farris, too (now there’s a relatively unheralded master). And yet they are equally capable of shocking. Or disturbing. Again, why some readers should want to be disturbed escapes me, but in a world where babies are sometimes raped and bayoneted in front of their parents, or in which our bodies can turn on themselves and literally eat us alive, I don’t blame horror writers for reflecting that and trying to wrestle with how truly awful things can get, how deeply, sickeningly violent humans can become. Writers write about the human condition, after all. Perhaps if I can tell some of these stories while shedding some light on the terrible darkness, there’s a glimmer of healing. Or maybe I and my fellow horror fans/writers are kidding ourselves and all we really want is that thrill ride on the roller coaster. Or maybe it’s some of each. I honestly don’t know. But thanks to my work with abused kids, I do know this: telling stories can be how we deal with trauma; in fact, relating our “truths” out loud is essential to what trauma experts have called “critical incident stress debriefing” and perhaps that, in the end, is the root impulse of the genre we’ve chosen to term “horror”—that by telling each other how it felt to meet the boogeyman, we’re simply trying to heal.

A version of this article appears in a recent Book Junkies Journal column. [subscribe2]

26 thoughts on “Catharsis or Carnival?”