Over Christmas, my husband and I were indulging in one of our more recent traditions, which is watching the Trans Siberian Orchestra’s DVD The Ghosts of Christmas Eve. If you’re not familiar with TSO, they’re a bit of a brain-stretcher. Their music is essentially heavy metal, but they are backed by a full symphonic orchestra. They are not the kind of band I would normally gravitate toward, but their DVD production was an instant hit with both of us.

In any event, one of their guest singers was singing a song (not your traditional Christmas carol) and I was listening to the words and following the story of the song and began to think about how we—all of us humans—are storytellers. As a writer, of course, I can easily say I am a storyteller. My husband is an actor, and I’ve realized that he, too, is a storyteller, albeit in a different way. No one can deny the popularity of books, TV and film, and all of those things tell stories. Our music and songs do as well, as do pictures, jokes, anecdotes, even normal conversation. When you think about it, is there any medium we use to communicate that does not tell stories?

What’s interesting and probably not surprising is that studies of the human brain have shown that we are hard-wired for patterns. The ability to recognize patterns is evident in the newest baby; they recognize faces first, and studies show they prefer symmetrical faces to non-symmetrical. Symmetry appears to be very important to the human brain.

One particular pattern that humans seem to gravitate toward is the circle. Whether due to its smooth, symmetrical shape or the inherent sense of completion, the circle has been a symbol of wholeness, resolution and fullness in human cultures far back beyond historical times.

In storytelling, the essence of the circle is the hero’s journey. 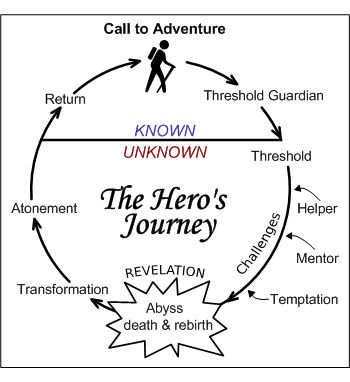 At the top of the circle, the hero begins his (or her) journey by either answering a call to adventure or by being forced out of his comfort zone by some primal force. This sets him on his path around the circle clockwise, which is normally through challenges or temptations or both, and can introduce enemies or allies or both. At the bottom of the circle is the abyss, the low point, the conflict which, once faced, leads to the transformation. The transformation then leads to awareness, understanding and atonement (at-one-ment) and finally the return of the hero back home. Yet while the hero comes home and there is a sense of completion and resolution, the fact is that the hero has been changed forever and will never be the person that he was. In this way, the circle becomes a spiral, for even as the hero completes his journey and returns to his starting point, he does so as a higher frequency, vibration or essence of himself.

I believe it is this circular path that captures our imaginations in stories. It is not only the symmetry of the fully resolved circle, but the struggle that is contained within it. If you were to approach a classic sculpture, you would no doubt appreciate the work that went into it and admire the beautiful symmetry of its completed form. But admiring the fully-formed work is a much more passive exercise than creating that form yourself, working through the problems and issues, taking on the challenge of wresting beauty from chaos. Once you have done that—created something new where there was nothing before — you can fully own and embrace the journey, and the completion means 1000% more than simply gazing on the finished sculpture.

In this way, we give our stories — our journeys — to our readers to experience. They go on our journey with us and live the struggle, the challenge, the conflict. They don’t just see the newly-wrought human in all his completion, they sweat alongside him as he makes his way around the circle. They know the toil; they fear the forces that act on him; they dread the decisions that must be made. Now when we bring them home again, back to the starting point, they can fully appreciate the journey, the circle, the pattern.

We are all human; we all resonate to patterns. I find it easy to think that we all crave stories, and the sharing of those stories links us in ever closer, ever larger circles.

We are storytellers all.

12 thoughts on “Storytellers, All”