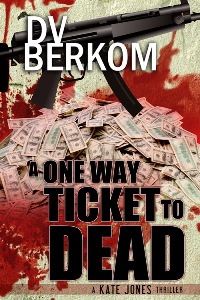 After years of running from her ex—a vicious Mexican drug lord—and his subsequent death, Kate Jones is ready to bury the past and try to piece together a new normal. But first there’s a loose end to tie and it involves digging up old ghosts that are best left alone.

Unaware her actions have attracted the notice of a powerful enemy Kate is plunged into a deadly fight for survival, as both her life and the lives of the children of a man she once loved hang in the balance. And, with the possibility of an informant inside the DEA, she doesn’t know who she can trust.

From the emerald green shores of Seattle to the lush Yucatán jungle and unforgiving Sonoran desert, Kate Jones must once again face her past…and hope she survives.

Excerpt from A ONE WAY TICKET TO DEAD by DV Berkom:

Quinn leaned down and spoke directly into my ear. “Time to move to the ramp, Kate.” He placed his hand on my back and pushed me toward the jumpmaster. It was hard to walk straight as the plane bucked and jostled, and I put a hand out to steady myself. Despite the cold, a trickle of sweat slid down my neck.

The jumpmaster lowered the ramp, and the noise from the wind increased dramatically. Panic rose in my chest, and I sucked in air to calm my racing heart. Artemis sauntered ahead of me, apparently unconcerned.

Concentrating on Artemis, I made it to the ramp where Quinn lifted her into my arms. I held on to her while he secured her harness to mine. Then, he stepped behind me, and I heard him snap our harnesses together at the shoulder. Surprisingly, Artemis didn’t struggle.

The relief must have shown on my face, because the jumpmaster smiled as he leaned close to me and said, “Don’t worry, Kate. Dogs don’t perceive heights. It’ll be just like sticking her head out the window of a car, and you know how much dogs love to do that.”

“If that’s the case, then this is gonna be the best car ride she’s ever had,” I replied.

He laughed and went back to his position next to the ramp.

“Stand up,” he called, motioning with his arm. The rest of the recon team struggled to their feet and checked each other’s packs as they waited for the next command. Quinn and the jumpmaster had gone over everyone’s gear before boarding but in this case redundancy was good.

The rest of the recon element staggered to the rear of the plane to join us. They waddled under the weight of their equipment toward the ramp like a group of oversized pregnant women with large bags hanging between their legs. Pascal tried to make me laugh by pulling faces at me, but I ignored his attempts and stared straight ahead.

I stuffed the NVGs into my Gore-Tex jacket, making sure the lanyard was secure around my neck, and glanced out the opening at the rapidly darkening sky. I didn’t dare look at the ground.

It was a long way down.

The jumpmaster knelt on the side of the ramp, held onto the aircraft, and stuck his head outside, searching for the drop zone.

What if the parachute doesn’t open? I thought.

Then Quinn will deploy the reserve chute, I told myself. You’ll be fine.

But what if that one doesn’t work? I argued.

Then you’ll be dead, so stop worrying.

I kept my gaze trained on the light above us. Red meant wait, green meant go. At this point I wished it would change to green already. Obviously, I had committed to the jump, since I was strapped to Quinn and Artemis.

Okay, committed might be too strong a word. Maybe trapped or forced to jump would be more appropriate. Either way, I couldn’t turn back now.

I took a deep breath and closed my eyes, reminding myself I was doing it for Lauren and Abby. Maybe if I thought of it as a dream, I’d be better able to function. Yeah, that was it. A dream.

My eyes flew open. The jumpmaster held up one finger. Panic raced up my spine.

Maybe this wasn’t such a great idea.

No. Definitely not a good idea. My body froze as the voice in my head screamed at me to turn back.

The light turned green. The jumpmaster struggled to his feet under the weight of his gear, thrust out his arm and pointed off the ramp. It was time to go.

Oh, Jesus God. I’m going to be the first one out.

I looked down as my feet reached the edge of the ramp. The wind howled past me through the gaping maw of the opening. It was dark. And cold.

Every fiber of my being wanted to dig in my heels and throw myself backward onto the plane.

“Can’t we rethink this, Quinn? I can’t—I really don’t want to go.” The panic in my voice was annoying.

“Too late, Kate,” Quinn yelled into my ear as he prodded me toward empty space. “Just fall forward.”

The wind tore the rest of the words from my mouth.

One thought on “Saturday Book Showcase: A One Way Ticket to Dead”