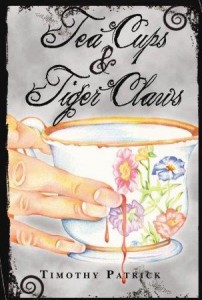 First comes the miracle and then comes the madness. The miracle is the birth of identical triplets, and the madness is all about money, of course. The year is 1916 and the newborn baby girls have become pint-size celebrities. Unfortunately, this small portion of fame soon leads to a much larger portion of greed, and the triplets are split up—parceled out to the highest bidders. Two of the girls go to live in a hilltop mansion. The third girl isn’t so lucky. She ends up with a shady family that lives in an abandoned work camp. That’s how their lives begin: two on top, one on the bottom, and all three in the same small town. And when their worlds collide, as they must, the consequences are extreme.

Tea Cups and Tiger Claws is available from Amazon, Smashwords, and Amazon UK.

Excerpt from Tea Cups and Tiger Claws by Timothy Patrick

Dorthea stepped out of the car and gave the skirt of her peach colored dress a gentle tug. The body-hugging chiffon, interrupted just above the hipline by flirty lace ruffles and a lace sash, fell easily into place. She walked confidently toward the door, a trace of a smile visible on her glossy red lips, but before she had taken five steps, the door flew open and Ermel stood in the doorway with a cigarette dangling from her mouth. She wore a threadbare dress and held a dirty-faced baby on her bony hip. “I don’t care what you got. I don’t want it,” she said. The cigarette in her mouth bounced up and down and little puffs of smoke popped out when she talked. “I don’t want no religion, no doodads you might be sellin’, and I don’t want to join no cause.” She slammed the door and the window rattled.

She hadn’t recognized her own daughter. Maybe the new, better Dorthea looked too good to recognize…or maybe Ermel had made too many visits to the cupboard and had a case of “Aunt Ginny blur.” She was soused, no doubt about that. After two drinks she giggled. After five she wept and hugged. After ten she turned into a mad pisser. That was the mad pisser who’d just slammed the door.

Dorthea turned the knob and opened the door. Trash and clothes and dirty dishes lay piled on the floor, except for a narrow pathway that led into the kitchen and the rest of the house. The stench of sour milk, dirty diapers, and stale cigarette smoke crawled up her nose. Home sweet home.

“I don’t know who you think you are missy,” said Ermel, “but in my house the strangers do the door knockin’ and I do the door openin’.” She put the baby in a dirty looking playpen and faced Dorthea.

“Maybe I’m not a stranger,” said Dorthea, entering the doorway.

“I said I don’t know you, and even if I did that don’t mean you can come barging into my house.”

Ermel was lying, her eyes gave it away, but Dorthea didn’t mind playing along. She opened her handbag, took out a piece of paper, and held it up to Ermel, who stood about ten feet away between the playpen and the kitchen table. “It isn’t your house, it’s mine. I’m your new landlord, and this piece of paper says so.”

“You own Yucky D?” She eyed Dorthea up and down while taking a long drag on her cigarette. “I don’t believe it.” She walked up, snatched the paper, and squinted at it, as if that might help her understand what it meant. She peered up at Dorthea, back down at the paper, and then turned around. As she walked toward the kitchen table she dramatically held her hand to the side and dropped the paper to the floor. It landed next to a dirty plate that had sprouted a crop of fuzzy, green mold. Dorthea picked it up and put it back into her handbag.

Ermel sat down at the table, flicked the long ash of her cigarette onto the overflowing ashtray, and said, “I’m wonderin’ how a young thing like you came to own Yucky D…unless maybe your daddy died and left some money that you kept all to yourself. Is that what happened?”

“No…that’s not what happened.”

“You mean your rich daddy ain’t dead? Well I do declare, he ain’t very smart then, ‘cause all you got here is a bunch of broken down shacks. Next time he’s got money to spend you should take him to a jewelry store.” She let loose with a raspy laugh that turned into an eye-bulging coughing attack, which didn’t seem to bother her much, as she came out the other end of it still smiling.

“I never got anything from him. He was a drunk,” said Dorthea.

“Sounds like my kind of man. You should send him around some time.”

“You need to decide if your daddy’s dead or alive, missy.” She took a final drag on the cigarette and jabbed it into the ashtray. “It makes it easier for a person to follow along.”

With a sudden lunge, Ermel grabbed Dorthea by the wrist and yanked her close. “And if he’s dead, and didn’t leave no money, how is it you’re standin’ here in a fancy dress holdin’ a paper that says you own Yucky D?”