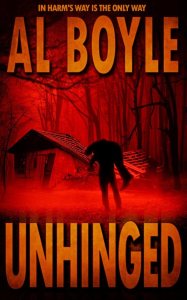 Amy Dylan is the lone eyewitness to the brutal kidnapping of local teen Jared Chambers. The details she provides are too vague for the police to take action, but she’s not surprised.

She was twenty miles away when it happened.

Amy Dylan is a psychic with a loyal fan base on WXYZ-FM. She knows the first twenty-four hours in a missing person’s case are critical. The police have no leads, no suspects, and no persons of interest.

Amy approaches the Chambers family and is greeted with skepticism and hostility. Undeterred, she investigates on her own and produces the first lead, drawing the interest of the police department and dividing the Chambers family. She also draws the ire of Jared’s captor, who challenges her on the air, providing chilling proof that Jared is at his mercy.

For Jared to stand a chance of survival, Amy must put herself in harm’s way.

Excerpt from Unhinged by Al Boyle

Amy’s heart hammered in her chest as she made the left onto Crestview Terrace. Thinking of Tom took her back, and she wasn’t enjoying the trip. Those were unsettling times and revisiting them was reliving them. Tough noogs. This isn’t about you, or you and him, or back then. You’re over it. So stay over it. She had agonized over whether to come or to call before deciding the information would be best shared in person. The thirty-minute ride had given her ample opportunity to second guess the wisdom of that choice.

She spotted the parked convoy and guided her sedan to a stop against the curb behind the last vehicle. You’re here now. She cut the engine and walked through what she planned to say for the umpteenth time. Who was she kidding? She’d probably end up winging it in the heat of the moment, anyway. Her radio show kept her in the shallow end of the pool where people’s problems were concerned; would she be up to the task if she became involved in this?

Let’s not get ahead of ourselves, missy. Once he hears what you have to say, you could be back behind the wheel before the engine cools.

She shoved her doubts aside and opened her car door.

The doorbell’s ring drew all heads in the living room to the front door. Tom hustled to it and stole a glance through the peep hole. His first glimpse had him thinking reporter, but a double take put him on the right track. He opened the door.

“Amy?” he said, with disbelief. He stole a glance back at the anxious and leering crowd, waving them off as he stepped outside and pulled the door shut behind him. The scent of fresh coffee wafted to Amy and dissipated.

Tom turned to face her.

Tom fell silent and furrowed his brow. Amy took a deep breath, but her heart hammered in defiance. Her mouth had gone dry on the way up the front walk. She was a little girl again, frozen in terror on stage during the school play, reciting her lines in her head before daring to say them aloud.

“I’m a medium. I have visions of things that have already happened. I believe I saw Jared being abducted.”

Tom’s eyes bored into her.

“Is this some kind of sick joke?”

“No. Check the WXYZ-FM website. I’ve been doing this for years.”

The door opened behind Tom. Sherri stepped onto the front porch, sizing up Amy before glancing at Tom. Her expression changed from puzzled to concerned when she caught a glimpse of Tom’s face.

“We were all in college together. Amy was telling me she’s a…”

Amy finished the sentence, surprising herself with the confidence she heard in her voice.

“What kind of human being are you?”

“The kind who can’t remain silent if I believe I can help. I had a vision of Jared being abducted, Mrs. Chambers.”

“Did you go to the police with this information?” she asked, and there was no veil to the challenge. Tom’s gaze shifted to Amy.

Sherri leveled her gaze at Amy before stepping back inside. The door slammed into the jamb in her wake. Tom sighed. Amy pressed her case.

“He was on the side of a road. Two lanes, solid white line down the middle. Lots of trees, cars parked on the shoulder.”

“How do you know it was Jared you saw?”

“I didn’t until I saw the news coverage,” she said. She could see the gears turning, and not in her favor.

“I don’t remember any of this.”

“I’m still not sure I understand how. But it’s real.”

“I know how it sounds. I know you’re living every parent’s worst nightmare. I have a child about Jared’s age. I believe I can help you…”