Author Mark Cantrell  has been told his writing demonstrates a certain dry humor, a cynical wit, and a tendency towards the darker view of life. While he is at ease with all that, he also feels his work embodies  an underlying optimism, a qualified celebration of the human spirit and its strengths, but a refusal to separate them out neatly into good and bad. “Life is never that neat and I try to reflect that in my fiction.”

Mark’s work covers a wide swath, from straight journalism to commentary. He says the tone changes depending on what he’s writing about. Depending on what is called for, he may adopt a conversational style, tongue-in-cheek humor, or the strident tones of an angry young man.

Mark says of his fiction writing, “I’m struck by the nature of many – if not all – of my major characters. They’re all outsiders, out of tune with their worlds, looking for a place to belong, but there’s some kink in their nature that means they’ll never quite fit in. In a very real sense, a lot of them are looking for themselves and while these traits may not drive the story – it certainly drives the characters’ response to the situations they find themselves in. It makes them wildcards that can take action in unexpected ways.

“The other thing about the heroes of my stories, a lot of them at least, is that they start out anything but the hero. The ‘camera eye’ might be focused on them, but they are in a sense peripheral to their own stories. Events are being shaped outside of their control, the movers and shakers are all around them, but they’re blown this way and that by the actions and the decisions of others. It’s only as they’re jostled and pushed around, forced onto a path they never chose, that they find the inner strength to start imposing themselves on events and start authoring their own destiny. They might never cease to be outsiders but in finding themselves they become outsiders on their own terms – and able to make a difference.”

Mark says his voice as author is always present, but to varying degrees. There are points at which a well-developed character tells the story in his or her own voice, and can speak to the reader more authentically. He regards writing as an enterprise in which he  collaborates with his characters.  I’d be surprised if he split the royalty checks with them though.

I always ask authors where they find their inspiration. I can’t really explain why I ask this question. Still, I found Mark’s answer interesting: “I often jokingly talk about the demons down there in the dark, lurking in my subconscious and tossing ideas back and forth until they find one they like, then they chuck it my way with a command to get working. Me? I’m just the typist.

“Most of my stories have exploded into my head in a flash, or in one case the inspiration slithered down my neck with the last dregs of a beer, but I’ve never had a middle of the night eureka moment when I’ve woken up with an idea (which is just as well, because I’d probably lose it while I fumbled for my glasses). I won’t say the stories have materialized fully formed, because they haven’t, but the essential story arc and theme was there, ready and willing to be fleshed out.”

Mark does have to deal with the challenge of switching between his journalistic toolbox and that of the novelist. Journalists have to get it quick and get it right the first time.  Journalism is very often about focus. This thought paradigm and its attendant skills can be antithetical to the wide-angle view and approach of the novelist.  Mark says, “When this happens, the air turns fairly blue, I have to say; there’s foul language, cries of despair and outrage, while I make like The Scream, and really I ought to be bald by now – but I get stuck because the journo in me won’t let go. There’s no easy way to deal with it when this happens. By and large, I have to let it take its course, walk away if necessary (and if I’m able), until I can relax back onto the story and just write the words without worrying too much about the quality. At that stage it’s more about getting the raw ideas down; the good writing comes later (if you can’t quite get it there and then) – but no, that journo in me wants right first time copy or else there’s hell to pay.”

Though Mark has not used beta readers per se, he does recommend a second pair of eyes to look over any work, but says getting someone suitable can be easier said than done. “In years past, I was a member of a writers’ group, so my work was being beta read and critically considered by a range of fellow writers on an ongoing basis. I’d thoroughly recommend a writer becomes involved with such a group, if you are able to find one that is suitable for you, because it does give you valuable feedback from your peers. It also teaches you to both give and take criticism.”

Like most indie authors, Mark is learning marketing on the fly and it isn’t something that comes easy. “I’m more versed in the introspective, used to staring at a screen or into space as I turn my imagination into a concrete piece of work; I’m less adept at the extrovert demands of huckstering the finished product,” he says.

Part of the problem comes from the nature of his work as a journalist. He says, “As a journalist, I’m trained to deal in facts and, if I may be so idealistically bold, present the truth (no laughing at the back there, please), whereas truth is secondary to the concerns of the marketing types: they’re paid to say their client is brilliant, regardless of the facts or the truth of the matter, and I’m paid to fend them off. So, when it comes to the issue of marketing my work, I find I’m being burned by my own mental firewall.”

Mark reads other indie authors and says his TBR list is growing since he got an e-reader. He characterizes some of the works he’s read as ranging from competent and entertaining to outstanding. “Since we’re naming names, M Ed McNally and Ian Woodhead leap to mind as two authors that have especially impressed.”

Mark advises aspiring writers, “Never give up. Learn the craft, listen to the advice, but be wary of the so-called markets. Too often they’re defined by marketing ideologies that will eviscerate your creativity for the sake of a tick box programme. Don’t follow the market, find your own niche, be your own market. At the end of the day, there are millions upon millions upon millions of readers out there and you can’t second guess and please them all – so be true to yourself and be true to your writing if you want to draw readers your way. Oh, and that point about learning the craft – it’s a lifelong process. If your writing isn’t constantly evolving, if you’re not open to improving, then you’re doing something wrong.”

He says that people often don’t quite know how to take it when he tells them he’s a writer. “The thing is, all writers are ‘ordinary’ people doing something extraordinary, but most ‘ordinary’ people seem to consider writers as somehow exceptional, special, a cut above the rest, certainly not someone they’d find moving in their social or work circles, so I guess they get a bit put out when they find that writers are every bit as ‘ordinary’ as they are.”

Mark believes all authors need to learn how to deal with the highs and lows. “And, yes, you are going to experience doubt, you are going to find the waves of despair crashing over your head, those little voices of despondency are going to call into question your ability, the worth of your writing, the whole point of it all, and you can’t let them win. Make no mistake, the writer is at war with themselves, and it’s a nasty, insidious guerrilla war – but it’s not hopeless. If it was, I wouldn’t be writing these words.” 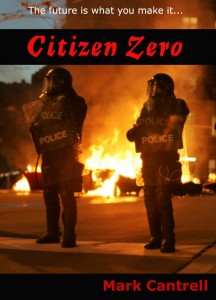 JobNet was supposed to usher in a better life for unemployed David Mills; instead it plunges him into a bitter struggle for survival when he is caught in the midst of a political conspiracy that pushes Britain to the brink of civil war…

David lives on society’s margins, forever on the verge of sinking into an excluded underclass known as ‘zeros’, until the JobNet scheme offers him the tantalising prospect of a better life.

The Government programme uses the latest artificial reality technology to create a paradise world where the unemployed gain all the help they need. He’s heard the hype before, but this time it actually begins to fulfil the promise: he finds love with Christine, the prospect of a job beckons, and he dares to dream of a worthwhile future beyond the dole.

Then a deadly virus strikes the system and his sweetest dream instantly becomes a living nightmare. He is forced to embark on a perilous journey to be re-united with the woman he loves, in the hope they can escape together into reality – but things are little better there…

The conspiracy has ignited a power struggle between two ruthless and powerful men. Once, they were comrades plotting to shape Britain into the dictatorship it has become: now they are foes whose animosity has plunged the country into violent mayhem.

The first, a renegade security operative turned terrorist, plucked David from the dole to deliver the virus; the second, a tyrannical Prime Minister ruthless in the preservation of his rule, he wants David dead – and fast – before the virus he carries can escape JobNet and overwhelm the wider network.

If David is to stand any chance of surviving, then he must take down both men, but the odds are impossible – he’s just a ‘zero’, after all, and trapped in a broken reality. It seems hopeless – until he stumbles across a dark secret hidden in the heart of JobNet.

It’s a cruel revelation that will change everything…

Citizen Zero is available on Amazon US, Amazon UK, Barnes and Noble, Smashwords, Breakthrough Bookstore, Kindleboards, Apple iStore, Sony, and Diesel. Citizen Zero has its own blog and Facebook page. Mark also has  a blog and a books blog. You can also follow him on Facebook.