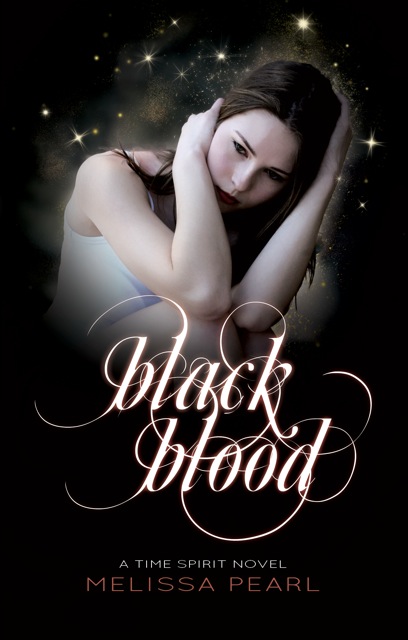 Today we have a sneak peek from the second book in Melissa Pearl’s Time Spirit Trilogy, Black Blood: 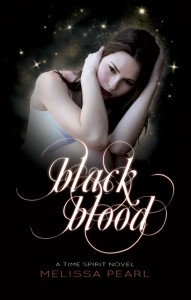 Gemma’s parents have put enough rules around her relationship with Harrison that she feels like she’s living on parole. But she wins one battle—a summer job working for Harrison’s step-father. It is the perfect chance to spend the steamy, hot Florida days with her boyfriend. It’s also a great distraction from the cellphone hiding in her underwear drawer—her only contact with Gabe, the mystery man who’s stalking her.

When she confronts Gabe, he tells her that her parents are not who she thinks they are, and Harrison has the gall to believe him. Surrounded by conflict, Gemma doesn’t know what to believe, and it takes a trip back in time for her to glimpse the sickening truth.

Thanks to her parents, she returns to the present to find the love of her life no longer exists. His family line was broken and now, so is she.

This betrayal forces her to seek out Gabe. Setting aside her fear of the truth, she must trust this man and learn what he can teach her… otherwise, she’ll never get her boyfriend back.

Black Blood is available through Amazon.com and Barnes & Noble.

And now, from Black Blood:

Gemma watched Harrison wrench the door open and fly through. Her muscles were tight as she chased him out to the forecourt. She arrived just in time to see Bryan’s new truck screeching away with a screaming Sam in its passenger seat.

Harrison stood puffing on the forecourt, his eyes wide with shock, his lips exploding with one repeated expletive. Gemma placed a calming hand on his shoulder as he reached into his pocket for a cell phone. She watched the truck swerve around a car and flinched.

Her eyes scanned the court for any cars she could “borrow” for pursuit, but the need was ripped from her when a motorcycle pulled up and screeched to a halt at her feet.

“Get on.” The man kept his eyes on the retreating truck.

Gemma’s insides recoiled as she recognized the dark hair and tanned skin of the man from the beach.

“I’m not going anywhere with you!”

“Do you really want do this now? I can’t get him back on my own. Now get on the bike!”

Harrison’s eyes were wild as his gaze flickered between the two of them.

Gemma watched him pace away, running a frantic hand through his hair as he spoke. Her legs began to jitter as she looked at the expectant gaze of “beach mystery man” then took on a mind of their own as they swung over the seat.

“Damn it,” she muttered as she wound her arms around the man’s waist and hoped Harrison would forgive her.

She heard her name being called as they accelerated away from her boyfriend.

At the speed the bike was going they soon had the truck in view on the I-95. Gemma winced when she realized she couldn’t see Sam’s little head screaming from the window anymore. Panic sizzled through her system.

“I’m going to pull up alongside the truck. Slap my shoulder when you’re ready to jump on and I’ll hold her steady.”

Gemma listened to his yelled instructions, emptying her brain of fear and focusing on the task at hand. The highway traffic whizzed and honked as they wove towards the erratic truck. Gemma braced her hands on the sturdy shoulders in front of her and carefully brought her legs up onto the seat. Crouching in that position, she narrowed her sights on the pick up and was relieved to see the passenger window was open.

The bike slid up beside the truck. She noticed Sam huddled on the floor in tears, but there was no blood. Her heart began palpitating again. Slapping the man’s right shoulder, she launched herself towards the window, managing to slide most of her body through in one movement.

The truck swerved. Hauling herself through, she grabbed at the wheel while trying to fend off a couple of fierce punches. She jabbed her elbow back in a swift movement that had the carjacker releasing the wheel and grabbing at his bloodied nose.

Gemma ignored his indignant cries of pain as she kicked his foot off the gas and headed towards the shoulder. Guiding the truck to an abrupt stop, she flicked the door open and shoved the boy out with a firm boot to the backside. He crumpled to the ground just as police sirens wailed into hearing.

Swiveling back, she reached for the whimpering boy on the floor and heaved him into her arms. His little hands snaked around her neck and he clung like a limpet.

“You okay?” She cupped the back of his head, closing her eyes in relief.

“That was so cool,” Sam sobbed into her shoulder. “What you did was so cool.”

Gemma shook with relieved laughter as she pulled Sam away from her and looked into his laughing, crying, smiling face.

She grabbed him back into her arms and shimmied out the open door. The police were cuffing the young teen who was busy yelling about how she had broken his nose and sending cusses her way like bullet fire.

Her eyes scanned the surrounding mayhem looking for the black haired rider, but he was gone.

A shiver laced through her belly.

He’s been following me.