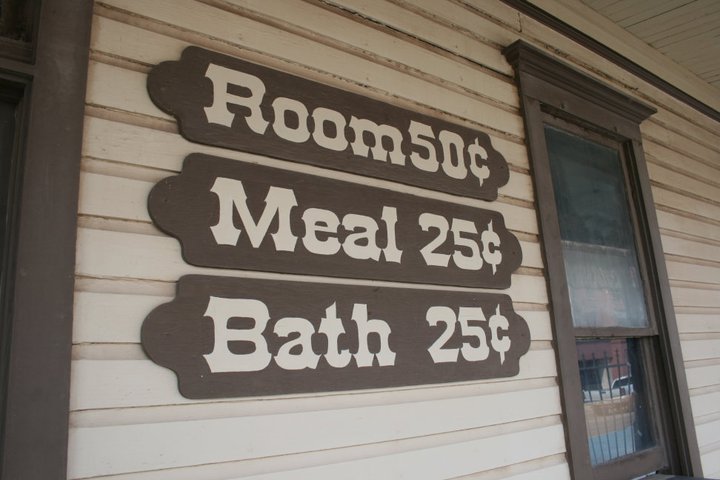 A total of 40 votes were cast in the contest this week. The winner (with 40% of those votes) is Dick Waters.

Congratulations to Dick, and thanks to everyone who participated – excellent entries! Now, without further ado, here’s the winning entry:

Asa ached from being on the trail, but he ached for something he couldn’t afford.

She was easy to spot, six feet tall, long red hair and an alabaster body showing under strategically placed feathers.

The flickering candlelight gave him an idea that would provide a room, meal, and bath. Maybe he would get what he really needed.

Despite his dirty appearance, he was able to pull Flame away from her rounds. It was hard for him to stay focused. Her scent was intoxicating. A quick conversation and a thoughtful look up and down by Flame sent her to the bar. She rang a bell until the room went silent.

Once she had everyone’s attention, she announced, “Asa believes he can shoot all eight candles out on that wagon wheel over his head. He says you will never see his pistol move. If any gentlemen care to bet, I will match your bets.”

Several minutes later the room was darker than before. Flame’s arm was around Asa as she pulled him up the stairs.

Asa’s two friends watched the show. One commented, “It really wasn’t fair. He was so good; he could shoot flies in mid-air with those flexible piano roll bands. He got that shortened ‘Asa’ nickname for A-S-A-S-A-S-A-S-A-S-A.”

The other cowpoke asked, “What does that stand for?”

“A sure a shot as seen around San Antonio’s stock yards.”

Asa smiled at Flame and enjoyed the two new bulges; one from his share of the money.