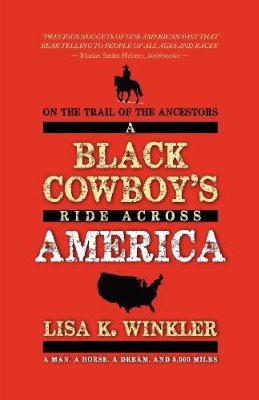 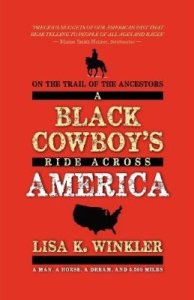 Today we have a sneak peek from Lisa Winkler’s African American historical biography, On the Trail of the Ancestors: A Black Cowboy’s Ride Across America.

Miles J. Dean, a Newark, NJ schoolteacher, rode his stallion Sankofa from New York to California to celebrate the contributions African Americans made in the settling of the United States.

Growing up in Brooklyn, New York, Dean first learned about cowboys from watching television. Although Hollywood helped keep his dream alive, the cowboys on TV didn’t look like Dean. His journey through 12 states retraced the steps of African Americans unknown by most people: the black jockeys, the Buffalo soldiers, the black cowboys and deputy Marshals. His unpaid leave of absence showed how an ordinary man can accomplish the extraordinary.

On the Trail of the Ancestors: A Black Cowboy’s Ride Across America is available through Amazon.com and Barnes & Noble.com.

And now, from On the Trail of the Ancestors: A Black Cowboy’s Ride Across America…

As the first 18-wheeler truck charged by and the bridge swayed underneath his horse, Miles questioned his common sense. He had never intended to put himself or his beloved horse, Sankofa, in danger.

To fulfill his commitment to travel the nation on horseback, he had to cross the Mississippi River. Determined to honor his forefathers, he steeled his nerves and reassured Sankofa, “Stay focused, boy, stay focused.”

Expecting that Sunday traffic would be lighter than during the week, Miles had started early, thinking he’d cross the Hernando Desoto Bridge from Tennessee to Arkansas without difficulty. When he saw how the behemoth vehicles clogged the six-lane, three-mile suspension bridge, he grasped the reins with both hands and used his weight and legs to keep the anxious Sankofa moving forward in a straight line.

Though Miles rode in the far right lane and his support driver crept slowly behind them, when a truck approached, Sankofa’s ears twitched nervously. The horse shifted to the right, hopped and did quarter turns so he could see the traffic behind him. Each turn brought horse and rider closer to the three-foot-high railing that presented the only barrier between them and the raging rapids about 100 feet below. Miles glanced down; the boats in the river looked like ants building a colony.

After each vehicle whizzed by, Sankofa relaxed, long enough to walk a few steps. As soon as another truck came along, he again became agitated, skipping and stomping, inching further to the right, closer to the railing. Miles, sweating as he saw the river below, and having no desire to swim, tightened his hand on the reins and pulled Sankofa back to the center.

With the guard rail not even reaching Sankofa’s shoulders, Miles pictured himself being thrown over, or the horse catching his foot, tripping, and sending them both over the rail.

About halfway across the bridge, when Miles wanted to offer libation to his ancestors, Sankofa stopped prancing as if he’d read Miles’ mind. Taking advantage of Sankofa’s mood, Miles quickly dripped the contents of his water bottle over the edge of the railing and, without wasting any time, returned to the center of the road.

When they finally reached the Arkansas side of the river, Miles dismounted, giving Sankofa a break before they continued. The horse, as grateful to be over the bridge as Miles was, neighed, and eagerly drank some water. Miles removed his wide-brimmed cowboy hat and wiped the sweat from his brow with his bandana. He reclasped the barrette that kept his waist-length dreadlocks in place, and returned his hat to his head. Saying a silent prayer of gratitude to his ancestors for keeping him safe during the harrowing, 20-minute river crossing, Miles remounted.

This frightening libation ceremony struck a sharp contrast to the more peaceful and celebratory one he had observed several months before.