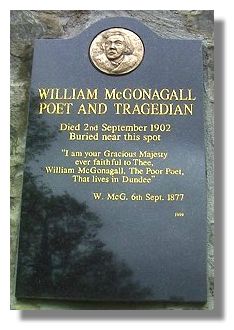 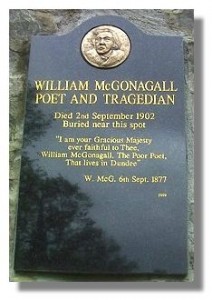 While discussing the great nation of Scotland recently, in these very pages, I was reminded of something. Undoubtedly, Scotland has bestowed upon our world some fine gifts, including the telephone, television, penicillin, caber tossing, Billy Connolly, the Glasgow Kiss, the Bay City Rollers and the words “bampot”, “stoater”, “drookit”, “hackit” and “blootered”. (I discern a visit to the Urban Dictionary in your future, dear reader.)

But along with such distinguished cultural contributions, Scotland also produced the mother of all cautionary tales, a tale that exemplifies supreme “bathos” (no, silly, Bathos isn’t the name of the fourth Musketeer… and stop interrupting). And that tale goes by the name of William Topaz McGonagall. (Yes, I did just say “Topaz”. Bear with me, you’ll see.)

bathos |ˈbāTHäs|
noun
(esp. in a work of literature) an effect of anticlimax created by an unintentional lapse in mood from the sublime to the trivial or ridiculous.

The key word there is “unintentional”. For some unaccountable reason, something already funny is far funnier when it isn’t meant to be. If you doubt me, think back to your school days when you were passed a note featuring a crude rendition of a specific body part, and at that moment the teacher uttered the terrible words, “David, please share with the class what you clearly find so amusing.” (Yes, I know your name isn’t David, you’re missing my point, keep up. Sigh.) Anyway, the effect was excruciating. Your internal organs would seem to liquefy, then inexplicably feel like gravity had just increased tenfold. Your hands would sweat, your face take on the texture and hue of something you’d order from Domino’s. There would be a feeling in your throat somewhat akin to having a nest of boll weevils stuffed in your trachea, aching for release. Bottom line: forbidden humour is simply funnier.

So, who was William McGonagall? Well, he was a poet. Of sorts. More accurately, he was a truly abominable poet. If he was in any other field, not even the most militant union could have saved his job. But the spectacular part is that he believed he was gifted… and not only with verse. He also acted. So filled with hubris was this man that while playing the role of Macbeth, he once refused to die at the appointed moment in the play. I suppose rewriting Shakespeare on the fly is a form of subverted genius. Who knows what went on in this man’s head?

There are so many examples of his execrable poetry out there in Google-land (he wrote some 200 of the things), so I’ll just drop a quote from the conclusion of his most famous poem, “The Tay Bridge Disaster”. Keep in mind this is a lament for a very real disaster in which 75 people met horrible deaths when the Tay Rail Bridge near Dundee collapsed while a train was passing over it. Remember, we should not be laughing in any way at this…

“Oh! Ill-fated bridge of the silv’ry Tay
I now must conclude my lay
By telling the world fearlessly without the least dismay
That your central girders would not have given way
At least many sensible men do say
Had they been supported on each side with buttresses
At least many sensible men confesses
For the stronger we our houses build
The less chance we have of being killed.”

A purer example of bathos we’d be hard pressed to find.

Oh, the Topaz part of his name? He once received a letter claiming to be from King Thibaw Min of Burma, informing him he’d been knighted as Sir Topaz, Knight of the White Elephant of Burmah. Either choosing to ignore or actually oblivious to this pretty obvious hoax, he henceforth referred to himself in his promotional material as “Sir William Topaz McGonagall, Knight of the White Elephant, Burmah”. Can someone hoax me something along similar lines so I can start a Facebook page entitled, “Sir David Emerald Antrobus, Knight of the Gold Phoque, Cascadia”, please?

Seriously, Google his name and I guarantee you will be helpless with laughter at many of the absurdities scattered throughout this man’s life. Unaware or unconcerned as McGonagall himself was, some of the events surrounding his seventy-seven years on planet Earth are scarcely believable. I’ll leave you with one such tidbit. No one can argue the truth contained in his first “review”, an ostensibly admiring comment from the subject of his very first poem, the Reverend George Gilfillan, who gushed, “Shakespeare never wrote anything like this.” Quite.

But what does his example teach us, as we each try to make our way in this world of letters? Should we mock him or admire him? In a way, perhaps both. Certainly on one level, I’m actually envious of the man’s stalwart self-belief. I’m as riddled with self doubt about my writing, after all, as the England national football team are about their continued progression at major tournaments: I just know I’m going out at the next penalty shootout. Whereas the McGonagalls of the world are apparently oblivious to those long dark tea-times of the soul (thank you, Douglas Adams), those quiet moments of reflection wherein most of us conclude our future most likely lies at a busy intersection holding a cardboard sign in one hand and a small, trembling dog in the other. But it’s easy to snipe, and perhaps this cautionary tale conceals another level of caution altogether. Despite his almost complete lack of writing talent, McGonagall’s bullheaded refusal to allow even a shred of self doubt to divert him from his vocation, his unerring insistence on his own brilliance, has ensured his seven collections of poetry are still being read over a hundred years after his death. Which, okay, is unintentionally funny, for sure, yet not really all that bathetic, is it?