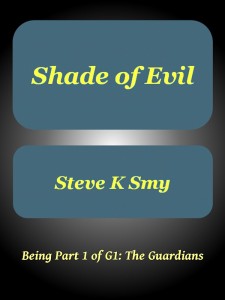 Today we have a sneak peek from the future fiction novel by author Steve K. Smy: Shade of Evil.

Poor Harry Plummer. He had a hard childhood, and adulthood brought no improvement. Now, he was about to be subjected to something from within his own body. An evil that shouldn’t exist was about to consume him…an evil that decided it was time to break free, into the world, to feed its insatiable appetite. Harry was no hero. He’d always been a victim. There was no guarantee he would survive the emergence of this evil. Confronting it would be the task of a shadowy organisation known as the Guardians. Would they be able to save Harry?

Shade of Evil is available through Amazon.com, Smashwords, Amazon UK,
and other online booksellers.

Here is an excerpt from Shade of Evil…

A darkness dwelt there, a vile miasma of misery that gnawed at the very soul of the man. It had been there for years, growing like some parasite, blocking out any trace of happiness, growing bloated with every bit of melancholy that was sucked from him. Worse, it was taking on a life of its own, a substance that should not exist. And the man was becoming something less, something hollow.

His name was Harry, Harry Plummer. He had been born in the last year of the Second Korean War, the second son and fifth child of James and Emily Plummer. His father had served in that war, guaranteeing that there would be no more children, thanks to his exposure to radioactive dust from “dirty shells”. He had also been wounded twice, the second being sufficient to get him sent home and released as unfit for service. James Plummer then entered a downward spiral into bitter resentment and heavy drinking. The big losers, of course, were his family. He couldn’t hold down a job and he became emotionally abusive towards them, though he never crossed the line into physical attacks. In the end, his liver failed him and he died in pain, separated from his family in a run-down hospital. Harry had been twelve. His eldest sibling, Thea, was seventeen and helped their mother cope with the younger children. His youngest sibling was nine year old Hayley, who became more than difficult. Harry, like his older brother Tom, a naturally sunny boy of fourteen, grieved but also felt, and expressed publicly, a certain relief that the terrorising had ended.

The difference between Harry and Tom was that Tom’s cheerful nature helped him to overcome every difficulty with relative ease. Harry, with a more introspective nature, simply stowed the bad away, where it was hidden in the clutter of his memories. Tom, of course, sailed through school and got a good job, going on to marry and have a family. It was all so easy for him. Harry never lived up to his real potential and ended up moving from poor job to poor job, never settling. He had lovers, and one had a child by him, but he always drove them away. By the time he hit forty, he was alone and lost in an endless drudge, his siblings all moved away and his mother locked in dementia.

Now, he lived in one of the dismal “blockhouses” that had sprung up throughout not only Britain but the whole of Europe. He shared the building with around two hundred other people, singletons like him or childless couples. His “apartment” consisted of a room where he had to live, cook and sleep and a bathroom that was barely big enough to be regarded as anything but a closet.

One thought on “Sneak Peek: Shade of Evil”