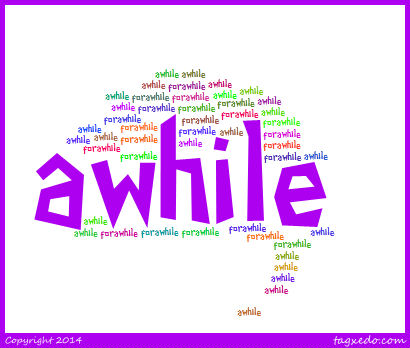 A few people…no…some people… Who am I kidding? A lot of people seem to get awfully confused over ‘for a while’ and ‘awhile’. It’s one of those mix-ups I used to utter a sotto voce tut-tut over whenever I came across it in my review books, but I’ve seen the error so much lately, increasingly so, my discreet tut-tutting has developed into a bellowing ‘Grrrr’.

‘Awhile’ is an adverb (a word that modifies the meaning of an adjective, verb, or other adverb) meaning ‘for a while’.

Try replacing ‘awhile’ with ‘for a while’:

You could also try substituting ‘awhile’ with another adverb to determine if you are using it correctly:

I walked quickly/I walked slowly (but had you said ‘I walked for awhile’, then I walked for quickly makes no sense at all.)

A while can be accompanied by a preposition:

For a while, a while ago, in a while

You could not therefore say:

Correct: I visited Paris a while ago.

It has been a while since I visited Paris.

So, the best, virtually foolproof way to figure this out is to try replacing ‘awhile’ with ‘for a while’: if it makes no sense, it’s incorrect.

Correct: I went to see my sister for a while

Incorrect: We discussed where to plant the roses for awhile

Incorrect: We’ll be going to the movies in awhile

Incorrect: I won’t be moving house, at least not for awhile

Incorrect: Once in awhile, I treat myself to a nice big glass of red wine

Correct: The children were asleep, so I sat and down and read a book for a while

Correct: We went to the park for a while, we played awhile, and then we went home