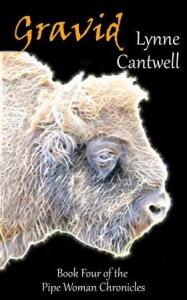 Denial is not just a river in Egypt…

Naomi Witherspoon, back home in Denver after her “vacation” in South Dakota, has amassed a catalog of things she doesn’t want to think about. Her due date is just around the corner, but she has yet to buy a single diaper – let alone look for a bigger place for her, her boyfriend Joseph, and the baby. Speaking of housing problems, Joseph’s grandfather is in failing health and needs to move out of his wickiup, but the old man won’t budge. Naomi and Joseph may have found a replacement for their woo-woo teammate/nemesis Jack in TV reporter Antonia Greco – but Antonia comes with her own set of problems, not least of which is that she’s dating Naomi’s ex-fiance, Brock. Meanwhile, Jack has escaped from the Mexican drug lord who owns him, and the thugs sent to find him aren’t above roughing people up.

Best of all, Naomi hasn’t shared any of this with her mother, who wants to sell her house in Indiana and move to Colorado.

If Naomi can negotiate this minefield, mediating an agreement between White Buffalo Calf Pipe Woman and Jehovah ought to be a piece of cake…

This book is available from Amazon, Smashwords, and Barnes & Noble. END_OF_DOCUMENT_TOKEN_TO_BE_REPLACED 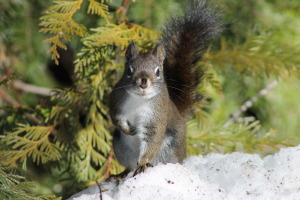 This is a squirrel with something to say. Give us a maximum 140 character caption for this photo.

If you have more than one idea, go ahead and put in as many entries as you want.

We’ll leave comments open until Friday night. Brooks and I will pick our favorite, and turn it into a motivational poster we’ll put up in the sidebar, crediting the author of the caption. Alternatively, if we don’t like any of them, we’ll just round-file the project and disavow any knowledge of it, and never speak of it again. Never.

So, give us your best shot. Be funny, touching, brilliant, or inspiring, but keep it clean. Just think: this thing could go viral. You could be the author of the next internet meme. Or not. 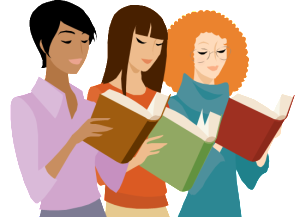 ARC (Advanced Review Copy) readers were a crucial part of the last “official” novel I released, Triple Dog Dare, co-written with the Evil Mastermind himself. Our ARC readers were a fantastic group of folks who provided us with feedback, reviews, proofreading, and a lot of positive energy going into the novel’s launch.

Back in the days when the Big Six ruled the world of publishing, ARCs would be sent out to reviewers well in advance of a novel’s publication. Some big-time reviewers wouldn’t even consider reviewing a book once it was published. They only wanted those very special pre-release copies, giving them an inside edge on other publications. This way, these reviewers were part of an elite group who received special advanced copies, and the publishers could bank on receiving a review from these high-circulation newspapers and magazines to help the book at launch time. This is why sometimes, in used bookstores, you will find a copy of a book with the stamp “uncorrected proof” on the title page. Okay, that was your history lesson. There will be a test later. END_OF_DOCUMENT_TOKEN_TO_BE_REPLACED 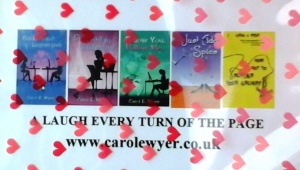 Author business cards are important (See Codebreaking For Beginners) and we often hand them or postcards of our latest novels out in the hope they will generate sales. However, how many times do you get that feeling that as soon as someone walks off with one of your cards, it’ll be forgotten? It will stay in a wallet or purse until the person empties it or worse still, it will be thrown away in the nearest bin.

Here’s a simple way to engage people, to make them read your card and hopefully hang onto it a little longer rather than throw it away without looking at it. END_OF_DOCUMENT_TOKEN_TO_BE_REPLACED