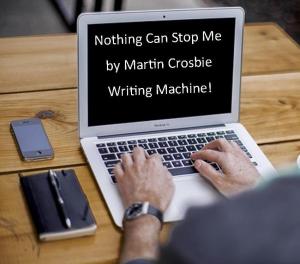 One hundred and eleven days ago I undertook a personal challenge. I made a pledge to write one thousand new words a day. Every day. No matter what. I described how I was going to try to accomplish this in an article for Indies Unlimited right here. I’m pleased to tell you that as of today I have over one hundred and eleven thousand new words written. Since it’s gone so well I decided to expand on the challenge, which I have now renamed the 1000/2000 pledge.

In the past one hundred and eleven days I’ve written twenty blogs. Because of this accumulation of articles I’ve been able to blog for the BC Editor’s Association, Whistler Writers group (soon to be published), Book Reader’s Medallion (twice) and several others. I’ve offered my opinions on pricing, social networking, paying it forward (my favorite topic), the glut of eBooks on the market, and I put together a list of places where authors can access hundreds of thousands of images and photos for free. I referenced Rob Ford, the ex (I hope) mayor of Toronto. I wrote about how it felt to turn fifty last month. And, I even wrote a blog when the manager of my favorite football team, Manchester United, was fired. It’s been fun and it’s given me a break from the other stories I’ve been working on.

I earn the bulk of my living from writing fiction. I have a self-publishing guidebook that readers have very kindly downloaded in the thousands over the past few months, but I am primarily a maker-upper of stories. I write novels. Since undertaking this challenge, in addition to writing blogs, I’ve written a first draft which will be the follow up to Believing Again: A Tale of Two Christmases, the romance novel that I released late last year. The new story Believing Again: A Tale of Two Valentines needs several re-writes, some beta-reader love, and then I will send it off to my editor. I’ve also written a portion of the last book in the My Temporary Life Trilogy. And, I’ve written thirty-thousand words of a story that I don’t know what to do with. I’m quite proud of it and I think the writing is strong but it doesn’t seem to fit anywhere. I sent it out to my number one beta reader and she had the same reaction. She enjoyed it but wasn’t sure there was a market for it. I may (for once) apply Stephen King’s advice and put it in a drawer for a few months and then come back to it. I’m not quite sure yet.

Producing new work was the primary goal of this exercise. I wanted to focus on writing more than marketing and I’ve almost done that. I believe my writing/marketing ratio is currently about 50/50. So, in that respect I’m very happy and will try to keep going with the exercise. The marketing aspect will always be there and will always require some work. I run some type of promotion on at least one of my books each month. I’ve found this is necessary in order to stimulate sales. But, there is one area where I’ve devoted less work. I haven’t been revising or re-writing my works in progress as much as I was before I began this project. In addition to marketing, something had to give and it’s been revising. So, the next step of the project is to integrate more revising and rewriting and make it part of the pledge also. So, on day one hundred and five I continued my pledge to write one thousand new words a day but I also began revising or rewriting a minimum of two thousand words a day too. This has pushed me over the 50/50 ratio, hence the birth of the 1000/2000 pledge.

During my workshops, after teaching the marketing section, someone always asks me how it’s possible to find time to handle all the duties that come with being a self-published author. It’s a good question. When I began this journey I spent far more time doing the non-writing duties than I do today. Some of that was because my efforts were spent in areas that didn’t work. There were days when I was blanketing every group and forum that I could find with details of my book. I don’t do that anymore. I have a pretty good idea of what works and what doesn’t. I have a support system around me that I rely on and between us we compare notes and determine the best areas to find readers and help us become better writers. Because of this, the amount of time I spend with non-writing chores has decreased significantly. It still takes time; there’s no doubt of that, but it takes less time than previously.

Although it’s gratifying to know that I’ve put the effort in and gotten those words out over the past three months, it’s been tough at times. Like the rest of the world, I have a busy life. My significant other and I compare our calendars every few days as we try to mesh our schedules. Over the past few months I taught three workshops and sat on a panel at a writers’ festival. There were nights when I just barely cranked out enough words to satisfy the pledge but somehow I managed to do it. It feels as though this is the next step in professionalizing and legitimizing my career as an independent author. So, for stage two of this pledge, I have added the provision to revise and rewrite a minimum of two thousand words a day, and I’ll continue writing my one thousand new words too. I’ll check in with you in a while and let you know how it’s going. And, if you’ve made your own pledge I’d love to hear how it’s working for you.