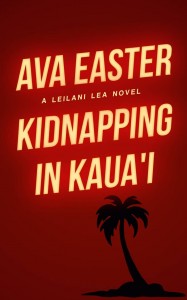 Leilani Leia lives on Kaua’i with her Auntie Rita, a GMO-protesting organic farmer. Lani’s biggest worry is about starting high school, until she stumbles upon a secret field in the mountains, and bites into a strange, new fruit.

Suddenly, the island’s ancient gods and legends come alive for her. A waking giant causes a landslide, a beautiful woman sets fire to her hair, and Hawai’i’s mythical ancestors, the menehunes, leave mysterious clues for Lani to find.

Thinking she’s going lōlō — Hawaiian for crazy — Lani decides to ignore these strange visions. But, when Auntie Rita is kidnapped, everything changes.

Lani knows the kidnapping is connected to her visions, and only the ancients can help her figure out who committed this crime. She can’t ignore her new powers any longer — without her help, Auntie Rita might be gone forever.

Kidnapping in Kaua’i is available on Amazon.com and Amazon UK.

Excerpt from Kidnapping in Kaua’i by Ava Easter

The four of us piled into the fiberglass outrigger and launched it out to sea. As we waited, we had fun rocking it back and forth, pretending to capsize. Then Malia saw firelight from a torch up on the cliff. “It’s starting!” she announced.

Chad looked up. “What’s starting? Are you gonna tell me?”

“I guess I can tell you now,” Pano said. “Ōahi is a fire throwing ceremony. Kaua’i royalty used to celebrate special occasions by setting logs and branches on fire and throwing them off the cliffs above this beach. They used logs from the hau tree for firebrands, and dry branches from pāpala trees to shower sparks into the sea. It was like the world’s first fireworks.”

A swoosh of orange flames carved the darkness up on the cliff as a log ignited. The log launched into the air, arcing toward us like a burning spear. A shower of sparks trailed behind it, a fistful of glitter in the air. Propelled by the wind, the log floated high over our outrigger and landed in the dark water behind us. I heard the flames pop and hiss as they died in the waves.

“Incredible,” Chad breathed. “It looks just like a real explosion!”

The next burning log was launched up on the cliff. Incredibly, a shooting star burst across the sky at the same time as the log passed over us, both of them sending off a showy explosion of sparks.

Pano reached up in the air. “I caught an ember!”

I knew instinctively what he planned to do. “Pano, don’t—” I cried, but it was too late; he’d already pressed the fiery ash into the flesh of his forearm.

Watching him, I started to feel sick in a way I’d never felt before. Waves of pressure closed in on my brain, as though an invisible vise gripped my temples. My hand flew over my eyes, a useless but instinctive gesture. When I removed it, my vision wavered and my stomach dropped, as though I was falling through this world into the next.

Suddenly, I found myself alone in an outrigger made of carved wood. Around me were miles of other wooden boats, some with red sails that glowed like silky beacons in the torchlight. The air was filled with the excited talk and laughter of hundreds of spectators. Their dark-skinned bodies were decorated with geometric tattoos, and their necks were piled with leis made from flowers and leaves. Some wore helmets with a raised line along the middle, and their silhouettes were fearsome.

A sensation filled my body so thoroughly that it soaked the marrow of my bones. It took me a moment to recognize the rush: it was the feeling of absolute power. I was the commander of my boat, mistress of my domain—as fundamentally connected and wildly electric as the mysterious force spinning the globe.

An ember fell into my hand and I clasped it. I didn’t fear the pain; I knew that one must experience pain to understand what it means to be truly alive. My body was covered with testaments to this belief: burn marks, scars, a tongue blackened with tattoos…all souvenirs from the full living of my life. I embraced the ember as a personal missive from the sky and ascended to the challenge it presented, slowly embedding the smoldering wood into the flesh of my forearm. The repulsive smell of my burning skin hit my nostrils, but I kept going, pushing the ember to my wrist. Then I stood up in my boat and held my new scar high, searingly triumphant.

I caught the sparkling eyes of the man with a similar burn in a nearby canoe, a man whose life had been intertwined with mine since the beginning of time. He bowed his head to me. I didn’t know what my feelings for him were, but they were all-enveloping. I smiled at him and continued to stand, showing off my scar, so that everyone would know I was the lucky one, forever marked by the spirit of fire.

The eventual snap back to reality practically crushed me. Without warning, I found myself back in the fiberglass outrigger. My friends’ faces were still pointed skyward as they continued to watch the show. The water was quiet and still. My forearm still throbbed, but when I looked down at it, I saw nothing but smooth, unmarked skin.