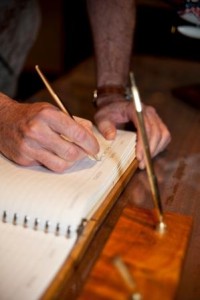 One of the things some authors do to promote their book is a “blog tour” which I’ve heard described as the modern day or indie equivalent of hitting the road for signings at book stores. The goal of such an undertaking is twofold. First, to get the word out that your new book exists (remember what Lynne Cantwell told us about effective frequency), selling some books while setting other readers up for future sales and second, to get a jump on the number of reviews on Amazon and other retailers. Some blog tours are review only, which helps with the second goal, but limits the number of bloggers willing to participate. Others offer different kinds of content for bloggers who are not willing to commit to a review. What these different kinds of content are will vary depending on who organizes the tour and the willingness of the author to create additional content. Interviews with the author, character interviews, and guest posts are examples of content frequently offered.

Let’s imagine you’ve hired a company to put together a blog tour for your new book. When you’re asked about the types of content you’re willing to provide, you respond with, “Yeah, yeah, I’m willing to do any of that. I just want as many people as possible to know my book is out.” The tour operator has done a great job, getting several sites to agree to review your book, a few asking to do interviews, and a bunch more requesting guest posts. Now it’s time for you to do your thing.

Reviews, no problem. You’ve already written the book. Other than hoping they don’t hate your masterpiece, your work is done. Interviews? Answer a few questions. Not an issue. But what the heck are you going to write for guest posts? The short answer is whatever will do the best job of attracting the right readers to buy your book. Coincidentally, I’ve got some thoughts on what that might be.

The best, most successful guests posts are created when the author follows three rules. Don’t visit the sausage factory, consider this an audition, and sell, but sell softly.

Don’t Visit the Sausage Factory
Too often an author’s first thoughts when brainstorming for guest post topics is to put too much emphasis on “write what you know” (which is presumably about writing) and not enough on “consider your audience.” Are you trying to interest other authors in buying your book or readers? Even if you know the audience of a particular blog has a lot of authors, remember that authors are readers too. It’s their reader side you want to engage. Don’t make your guest post about the writing process. The typical non-reader doesn’t care and for many reading about the how of creating your book is akin to a visit to the sausage factory: a good way to turn a carnivore into a vegetarian.

Consider This an Audition
A guest post isn’t typically fiction, but that doesn’t mean it can’t tell a story. It should. Ideally tell that story using the same style as you do in your book. If you’ve written a book with lots of humor, this isn’t the time to get serious. Whatever the subject of your guest post, make sure your author voice shines through. As much as you can, give the reader a sample of what they might experience reading your book.

Sell, but Sell Softly
This last item has two parts.
Sell. That’s one of the goals, right? The best way to do that is by writing about a subject that will pique a potential reader’s interest in your book. That’s accomplished by choosing a topic that ties in some way. If it’s personal, so the reader comes away feeling they know a little about you, that’s a positive as well.
But don’t sell too hard. You can mention your book, but no more than once or twice. It’s acceptable at the start of the post if it helps set up what you’re going to talk about and at the end of post to tie it in to your book and as a subtle reminder to the reader that you’re there because you have a new book. Any more than that and your post starts to read like ad copy which isn’t what you’re aiming for.

Stop Telling Me. Show Me.

If you’re like me, generic discussion only goes so far. Concrete examples help vague generic concepts gel in my mind. If you’re willing to read some more, I have a few links to some good examples.

In this guest post, horror author Edward Lorn talks about his dad. It very personal and has a unique, unexpected perspective, not unlike Lorn’s books. In this instance he thanks his father for being lazy and emotionally abusive. Then he subtly ties it in to his book at the end.

In her guest post, Brenda Vicars talks about her experience teaching English classes in a prison. She doesn’t mention her book at all. But by the final sentence of her post, if you’re the right reader for her book, you’ll be hooked.

My last example is different. I’ll sometimes suggest that there is a story about the inspiration for a book, or at least some aspect of it, that would make a good guest post. The first two examples do that, but this one by VM Gauthier takes that concept to another level with a history and art lesson thrown in for good measure.

What are your thoughts? What makes a good guest post and, even more important, what has worked for you?