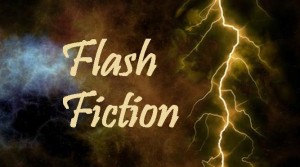 As I hope you all know, here at Indies Unlimited, we have a weekly flash fiction contest. The prompt goes up on Saturday, and the submission period closes on Tuesday. The word limit for our contest is 250 words. But there’s more to flash fiction than just our challenge.

As a general rule, flash fiction is considered to be less than 1,000 words long. And believe it or not, you can study how to write it. I did a web search for “how to write a flash fiction story” and got five million hits, including some for courses that would take way longer to complete than would simply writing a bunch of flash pieces until you get the hang of it.

Flash is a recognized format for fiction, with elements that each story ought to include. As usual with these sorts of things, the list of elements varies, depending on who’s writing it. I’ve seen lists of three, four, five, seven, or ten elements, or do’s and don’ts, or what-have-you. I like the number five, so for this article I’m going to stick with five things your flash fiction story should include.

1. A plot. To be clear, a flash fiction piece is a complete story. Just like a longer piece of fiction, your flash piece needs a beginning, a middle, and an ending. I saw one website that recommended writing an outline for each flash story. I think that’s going a little overboard; your outline could end up longer than the story. But if your story doesn’t have an ending – if, say, you find you’ve written a scene that could be part of a longer story, or even part of a novel – then it’s not technically flash fiction.

2.  Characters. You don’t have a lot of space to describe your characters, obviously, but readers should still be able to tell them apart. Use telling details that you can describe in a few words. Keep your character count low, and stick with one point-of-view.

3. A hook. A flash story should start with a compelling scene and keep going. Just as in any other type of story, you need to include some kind of conflict – an internal or external (or both) challenge that your characters have to meet.

4. A slam-bang finish. Remember what I said about flash fiction needing an ending? A lot of successful flash pieces employ a twist at the end. Think of structuring your story as you would a joke; although your ending doesn’t need to be funny, it ought to be something that the reader didn’t see coming.

5. Edit your work before you hit submit. This is the place to hone your self-editing skills, guys. Cut all of your little crutch words: just, actually, that, and so on. You know the ones I mean. Then read the thing aloud – it will only take you a minute or two – and make sure you didn’t forget a word.

That’s it. Oh, and have fun! See you Saturday.