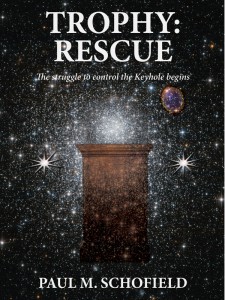 Imagine an Earth restored to perfection under the care of ten women Guardians, who answer only to a governing computer. Imagine a peaceful, colonized Solar System. This is what the New Victorian Empire has accomplished in the 476 years of its existence. Now mankind faces extinction because of a genetic mutation caused by the catastrophic collapse of Earth’s environment in 2065 A.D., the year the Empire began. The Keyhole anomaly, a wormhole in space, offers a solution; time travel to transport genetically sound humans from the past. A powerful underground organization is rapidly building their forces to eliminate the Empire and gain control of the Keyhole and the Solar System. Only the Planetary Control Corps (PCC) under the leadership of Star-Commander Abigail VanDevere and the dynamic team of Lieutenant Janet Rogerton, Pilot Kolanna, Martin, and Panther stand in the rebels’ way. Will the strength and determination of the PCC be enough? Will they have time to succeed?

Trophy: Rescue is available from Amazon.com and Barnes & Noble.

And now, from Trophy: Rescue…

“It’s 05:30, and Martin hasn’t returned. He’s either injured or captured. We can’t wait any longer – take a medical kit and your stun-phaser.”

“I wish we had bear repellant,” Kolanna said as she strapped on her weapon and slung the med-kit on her back.

“Take this battle knife, too,” Janet said, handing her one and strapping on another. “I hope we won’t need them.”

They emerged through the energy field of the cloak hiding their small aircraft and strode off in the beginning light. They followed the banks of the small stream hastening to the river east of them, tumbling down in small cataracts around dark gray boulders thick with moss and lichens. The morning mist clung to the trees and narrow canyon walls, hiding the view above, but allowing the morning cries of awakening jays, chickadees, and chattering squirrels that scolded the two women for their sudden appearance.

The women hurried along through small meadows of mountain lupine cradling singular dewdrops, sparkling like diamonds in the gathering light. They passed a profusion of wildflowers – blue-bells, shooting stars, and Indian paintbrush in dusty pinks and ocher, waiting for the sun to expose their subtle colors, but unnoticed now in the gray mist and their worrisome task at hand.

Hawthorne bushes, chokecherries, and sprawling ferns shed their coats of dew, soaking the women as they scrambled down the rough trail hoping to find any clue that would lead them to Martin. They turned a corner where the canyon widened and the tall pines and firs fell away to an open meadow thick with wildflowers, grass, and sagebrush.

In front of them lay the river beneath white limestone cliffs, yellowish gray in the early morning light. Rays of pink stabbed up into the sky behind the mountains, still shielding the rising sun, magnificent in the birth of a new day.

“I can see why Martin loves the mountains,” Kolanna said between deep breaths. “I need to stop , my side is starting to ache.”

The faint croaking of ravens drifted down from the high cliffs and a lone hawk barely visible to sight cried out from the sun filled sky above. The air was still and heavy, pungent with the mixture of sagebrush, pines, and the wet, thick grass that occupied the level meadows at the river’s edge.

“It sounds like ships – at least two. It could be the LU-7’s we saw.” Kolanna strained to hear more. “The sound is louder. They are coming our way.”

“Quick, back to the trees,” Janet said as they broke into a run.

Halfway to the towering firs the sound of the approaching ships was unmistakably louder. They ran with all their strength and were nearly to the trees. From around a bend in the river the throbbing of the engines could be felt but not yet seen. The two women finally reached the trees and ran in for some distance. They collapsed beneath a giant spruce tree, shielded by its thick low hanging branches. Kolanna held her side, waiting for the pain to lessen.

“If they have their infrared scanners on we’ll be like ducks out of water,” Janet said. “We may have to make a run for it.”

One thought on “Sneak Peek: Trophy: Rescue by Paul Schofield”