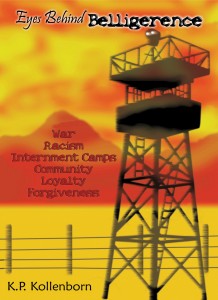 Culminating a bitter-sweet epic and traditional coming-of-age story, ‘Eyes Behind Belligerence’ sets precedence to fear and hatred, to families torn apart, and to the calloused response of internment camps. While two Japanese-American families endure the wake of Pearl Harbor’s wrath, each member must face the most painful question of their life: Where does their loyalty stand?

This title is available from Amazon, Smashwords, and Barnes and Noble.

How did you come up with the title for your book? Does it have any special meaning?
I think the word, belligerence, upholds a physically powerful statement about how malicious the world can be; and by using the noun, eyes, represents how the characters view the world around them. There’s a passage in which Jim writes in his journal: “Exiled, shamed and damned like bastards, we stare through these barbed wire fences, our eyes. Our eyes betrayed by this world; our eyes behind belligerence.”

Who was your favorite character and why?
I usually like my favorites to be in the doubles. For instance, I prefer unlikely friendships between two characters, such as Jim and Russell. Without having contrast, then a single character is uninteresting and therefore, unfavorable. My book deals with contrasts between two people who learn from each other in order to improve their behavioral patterns.

Does your book have any underlying theme, message, or moral?
Forgiveness. “As Jim left the bank, he remembered his mother reminding him to laugh three times: once in praise, once in promise, and once with purpose. He planned to donate the money, praising the memory of Tomiko. And for others who were suffering the identical disease, defining his purpose. But most of all, he would forgive a world that perhaps deserved another promise.”

What would/could a reader or reviewer say about this book that shows they “get” you as an author?
The book deals with tough questions, namely, what does it mean to be Japanese in America after Pearl Harbor? But furthermore, how do you regain and/or sustain the family honor when the whole country – and sometimes, your own people – is against you? This story allows us to feel what it would have been like being in those camps. Watching friends and family die, getting separated from each other, all while trying to live as normal a life as you can.

Give us an excerpted quote from your favorite review of this book:
“Eyes Behind Belligerence is fascinating, and it shows the World War II period from a different perspective than most American history books. It is worth four stars.”

Where can people learn more about your writing?
http://kpkollenborn.com/