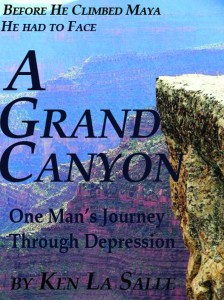 Today we have a sneak peek from the memoir by author Ken La Salle, A Grand Canyon.

Before Climbing Maya, author Ken La Salle had to face A Grand Canyon. He’d lost his wife and realized that he really couldn’t live without her. His choices were to either continue facing a life of self-destruction, drugs, and booze, or… a running start and a jump over the edge to end it all.

Ken’s story is filled with dysfunctional families, love found and lost, breakups, breakdowns, and remarkable hope. But the most amazing part of the story isn’t what set him on the road to the Grand Canyon, it’s what happened… afterwards…

A Grand Canyon, is available in eBook and audio book through Amazon.com, Smashwords,  and Amazon UK.

Here is a sneak peek from A Grand Canyon…

That’s one of the reasons nobody goes into the slow lane.

I mean, look at what they call it.

How are you supposed to get anywhere in a lane like that? You already know what’s going to happen! Who’s the moron who thought this up? Why couldn’t they have given it a better name? Something like “The Path of Great Relaxation” or “The Lane of Equality” or how about “The Scenery Appreciation Zone”? That’s how you get that 80 year old guy in the 1983 faded blue Ford Tempo with the bumper sticker that reads “I stop for seizures”, the guy whose pace maker is plugged into his radio set on the 24/7 Montovani station, that’s how you get him to get in the other lane. “Ah, the path of great relaxation!”

Speed Racer would never drive on a track that mentioned anything about relaxing or scenery appreciation. His car drove THROUGH the scenery!

And that’s another thing about the slow lane, Chim Chim, another reason why slow traffic won’t keep right. You know that the minute you do, some putz in a Hyundai is going to pass you. How’s that going to feel?

It’s like giving up. Throwing in the towel. The minute you get into the slow lane, you might as well just die because you know you’ll be stuck there forever. Might as well just turn your left turn signal on and leave it on because the race is over for you.

There’s no getting around it. Eventually, you’re slow. Admit it. And, while we’re at it, you might as well just face the fact that the guy who passes you is never going to get a ticket. He could be waving a bazooka in one hand and a bottle of Bacardi in the other with his tailpipe on fire and a vanity plate that reads COPKILLER – C O P K I L R – he’ll never get a ticket. Sorry, but it’s best that you face it now.

I’ll tell you what they should do with the slow people. Instead of telling them to drive in the slow lane, there should be a big sign that reads “Slow people. Disperse amongst all the lanes. Keep the rest of the drivers in line while we’re out getting donuts. Signed, the Cops.”