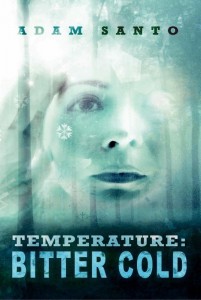 Adam Santo offers this riveting sequel to his debut dark fantasy novel of the Temperature Trilogy. It will have readers twisting and turning in their seat. A magnificent blend of intrigue and suspense, with a dash of trenchant wit. Sally’s trek through a world of unimaginable creatures will bring her face to face against a menacing entity to outdo them all – the church’s secret division, The Cross. Sally has been kidnapped by them and Bocnic, her zombie-fied knight in slightly shiny armor, must find her before it’s too late. And, that’s just the beginning. Much more stirs beneath the deviously shallow waters of life than either of them know about. Will riptides of a forlorn lover drive a wedge between Sally and Bo? How will this bitterly end?

Sally blushed until her cheeks hurt as he fidgeted with the key. Elation consumed her in a flash when intoxicating power purged pain from every inch of her being. Exhilaration of having magic pour through her veins again made her drunk with power. Sally forced those unwanted feelings of lust and passion deep down. Now isn’t the place to toy with such ideas. Not that she needed immense mystical forces to tell her how to feel towards Bo – that came naturally.

Bo threw the handcuffs in back and waited for her to get comfortable before closing the passenger door. He scurried around the small car for the driver’s seat, put it in gear, and peeled away from the scene. When Sally looked at the ignition she saw a key missing, the steering column cracked. He must have noticed her appalled look, “There wasn’t any time to rent a car.”

“You stole it?” Sally said, uncertain how to react under the circumstances. Not happy, but glad he found a car to carry her away.

Bo could only grin, “Rates are cheaper this way.”

She released a spurt of laughter. He could do that to her. “I’ll forgive you this once. So long as we make it out safe, however, alive will do in a pinch.”

“Speaking about being alive, how’d you do it?” he looked honestly perplexed. “They had a graveyard.”

She took a deep breath to steady her nerves while dredging up the memory, “Demric said he brought me here to test a theory. Every undead person he kidnapped fell lifeless before they made it into the church.” Right then she wished being special belonged to someone else, “They know I can raise the dead. He even had a name for me, Bringer. Something to do with old scrolls tucked away in their archives. I guess they have records hidden away about the first one, too.”

Bo sat brooding over what she said. Sally knew it because of the way he set his jaw. How strange for her to pick up his mood swings after such a short time. Almost as if we’d spent a life time together in the span of a few months. He stared out at the slick road, not unlike the ones in Colorado. Inky black asphalt glistened under their headlights like a hazy frozen pond reflecting back the sun’s first rays of the day.

“I’ve never met Demric, but he has made a name for himself in supernatural circles. What else did he ask? I’m sure testing you against a graveyard was just the beginning,” An eyebrow lifted, while the other dropped into a squint with his query.

Now it was her turn to be stunned, “You heard of this madman and never did anything about it? Are you insane?”

Bo took offence, “Now, what would you have had me do? Storm his fortress and stick Demric’s head on a pike for all to know him dead?”

Bo took his eyes off the road to make a point, “No, just another beginning.”