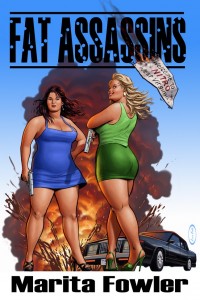 Today we have a sneak peek from the humorous novel by Marita Fowler: Fat Assassins.

Southern style sweet-potatoes Shasta and Ulyssa have stuck together through thick and thin since their escape from third grade fat camp. But on one dark day, they both find themselves unemployed and searching for a new job. Confusing mafia lingo leaves the girls thinking they’re being interviewed to cope with a rodent infestation and they’re shocked when they receive a target profile and an envelope full of cash. They want out, but it’s too late. The mob doesn’t allow do-overs. But the clock is ticking and when the body count is still zero after multiple attempts, the boss decides to bring in additional assassins to finish the job and tie up loose ends. And the girls just happen to be one of those loose ends.

This book is available on Amazon, Amazon UK, Barnes and Noble, Kobo, and iTunes.

And now, an excerpt from Fat Assassins…

“Got another one this week. Y’all want to hear the story?”

“We had a feller come into the store on Friday night wearing cami hunting overalls and a Mexican wrestling mask with his blond goatee hanging out the bottom. He walks right past the door greeter, straight to the pharmacy, points a plastic bag at me and demands I give him some oxycodone.”

“Did you do it?” Mitchell asked.

“Why, hell no! I could see right through the bag that it wasn’t a gun. It was just his damn hand, so I figured I’d teach him a lesson.”

“He was stoned outta his mind, so I gave him a big bottle of Tagamet. Told him it was generic oxycodone cause we were out of the other kind. He grabbed the bottle and ran out the door, right past the greeter, who thanked him for shopping at Walmart.”

Mitsy gave Sam an uncertain look. “Did you kill him?”

“Lord no! It ain’t deadly. It’s used for indigestion.” Sam started laughing while the rest of us waited for her to explain. “Buuuuuttttttt it just happens to turn urine BLUE.”

The table howled with laughter.

“When he sobered up and realized he was pissing blue, he rushed over to the hospital. I’d already warned the hospital and police about the robbery. So, when he showed up Deputy Hodde nabbed him and called me down to the station to ID him. Sure enough, it was George Dilford.”

“George Dilford’s been arrested again? He can’t stay outta trouble.” Johnny appeared out of nowhere, grabbing the last open seat at the table. His lumberjack sensuality had Mitsy and Sam staring at him with undisguised lust.

“He got arrested for stealing acid reflux pills from Walmart. He thought it was oxycodone,” Ulyssa snipped. “And why are YOU here? You weren’t invited!”

“I wouldn’t miss my girl’s birthday party,” he said, giving her a wink.

She groaned and rolled her eyes. “First off, I’m not your girl. Second, it’s Shasta’s birthday – not mine. So, you can leave now, stalker!”

“Happy Birthday, Shasta! This round’s on me.”

Jumping up from the table, he started taking orders before Ulyssa could protest.

“Two Michelob Lights, one Bud Ice, one Hard Lemonade, and one Zima?”

Everybody at the table looked at a scowling Ulyssa.

“Fine. Glad you can profit off my stalker!”