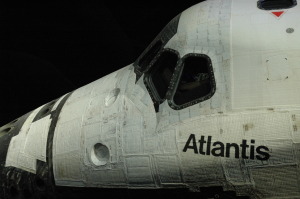 I’m going way off base today. I’m writing this on the 44th anniversary of human’s first footsteps on the moon. As I write, I look up and see the Space Shuttle Atlantis displayed as if in orbit, complete with space dust still coating its surfaces. Sitting on a bench in the dimmed lighting, I’m surrounded by artifacts and history at the Kennedy Space Center.

Neil Armstrong’s first steps on the moon, and Atlantis, the last manned mission in the shuttle program, represent the two bookends in the American space program.

Currently, the country does not have the means to put humans into space. The US has to rent space on a Soviet rocket to get to the International Space Station. 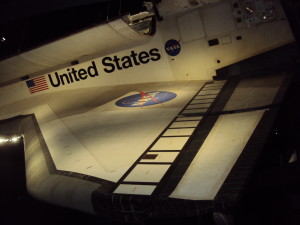 What does all this have to do with writing? Everything.

What most people don’t realize is that 45 years ago, before we reached the moon for the first time, a group of people at NASA had a dream of sending a reusable rocket to and from space. The entire country was focused on the Apollo program and putting a man on the moon. Before that task was completed, engineers and other scientists jumped into the shuttle project. After the winding down of the Apollo program, the first space shuttle, Columbia, launched on April 12, 1981.

Although the program suffered many setbacks and delays, the shuttle program brought a new era of space flight that sprouted from impossible scenarios and never-before-accomplished engineering and technology.

What would have happened if NASA had waited until the end of the Apollo program to start designing the shuttle? There would have been an 18-year delay in progress and exploration.

This leads me to writing. The traditional publishing industry has done the same thing for decades. Along comes the advent of self-publishing with new platforms, technologies, and distribution channels. Early adopters have embraced the opportunity. Many of you may feel like the indie publishing industry is already maturing. That’s the furthest from the truth.

As the traditional publishing world continues to plod along in the same fashion (old space flight) things are changing (the shuttle program) at light speed. We are the ones who will be in position to take full value of our changing future. We’re trying new things with technology and platforms that have never been done in the history of publishing.

We must innovate and BE the change for the future. People will look back and recognize what we’re doing as pioneers in the industry. All of our family here at IU is a part of that—sharing the who, what, and how to be successful as an indie author.

However, we can’t stop there. We must continue to innovate and push the limits. We must band together as one to help all our colleagues. We need to show the world that indie authors have something of quality and value to share with the world. 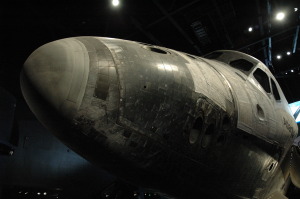 If we don’t, we may end up like the space program. You see, there’s more to this story. Now that the shuttle program is over, we can’t send anyone into space. People got comfortable with the shuttle program and thought it would go on forever. Sure, I understand that budgets and government play a role, but in the end, we are years away from being able to use our own rockets to get back to space.

As indie authors, we must be looking years, even decades, down the road. We’re not in this to get rich quick. We’re in this because we are passionate about what we do. We need to learn our business—formatting, editing, publishing, platforms, technology, distribution, and more. We need to know what changes are coming down the road.

No, I take that back. We need TO BE THE SOURCE of those changes. Let’s not get comfortable with our new-found toy. It may keep on going like this for years, but one day … it will change. Let’s be ready for that change before it happens.