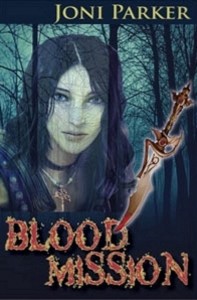 Today we have a sneak peek from the epic fantasy novel by Joni Parker: Blood Mission.

The two most powerful Elves on Seaward Isle, Prince Darin and Lord Odin, survive an assassination attempt by the rogue Elf Mellen, thanks to the Prince’s young half-breed female cousin, Alex. Now shaken by events, they task her with a Blood Mission — to hunt down and kill the rogue Elf, or die in the attempt. Alex’s training as a tracker doesn’t fully prepare her for the complex mission as she finds the fate of kings and the safety of the inhabitants of Seaward Isle squarely in her hands. Can Alex survive her mission long enough to discover her own destiny?

Here is an excerpt from Blood Mission…

Alex rode east on the coast road through the barren winter landscape. Just ahead, three large men rode towards her. There was no way to avoid them, so she continued on.

As she got closer, the men blocked the road. Their clothing was worn and dirty–ragged scarves were tied around their necks. Their broad-rimmed hats were pulled low, obscuring their eyes, but broad, unpleasant grins revealed their yellow teeth.

On the sly, Alex checked her weapons as she came to a stop.

“‘Morning.” One of the men raised his hand to his hat and tilted the brim politely.

“Good morning.” Alex nodded. “It’s a beautiful day, isn’t it? Could I please get by?”

“You can’t get by without a fee, girl. All girls have to pay us,” the man said. “If you come quietly, we won’t hurt you.”

Alex frowned as they moved in. They looked familiar. Then, she flashed a smile and cocked her head. “How have you been, Wallace?”

“Fine.” Caught off-guard, the man straightened in the saddle–very surprised. “How do you know me?”

“We’ve met a few times, and these are your friends, Gorman and Turnin.” Alex pointed at the men as she identified each one. “I met you at Lord Odin’s house several years ago when I was with Scout Nora. Then, I saw you again a few years later when you were going to attack Chancellor Ebbit and the Scinthian Scouts. Weren’t you searching for the Black Elf?”

The men were stunned into silence, exchanging confused glances and pulled nervously on their horses.

“Damn!” Wallace grabbed his hat and slapped it against his thigh. “You’re the Count’s daughter, ain’t you? What are you doing here?”

“I was told that the Witches of Winden identified him as the Elf Mellen, and I think he went east to the Castle-by-the-Sea.” Alex paused, waiting for a reaction to her concocted story.

The men glanced at each other and frowned. In hushed tones, they discussed the issue among themselves.

Wallace turned back to Alex. “Now just wait a damned minute! Why is Mellen the Black Elf? He rescued the Wizard, so why would he kill him?”

Alex shrugged. “I don’t know. Maybe he was done with him. I didn’t ask why.”

Wallace pursed his lips and turned to his friends. He wanted to pick up the pursuit, but the other two argued that it could lead them into a confrontation with Mellen.

Alex hid her smile. There was no need for these men to know the truth.

“We saw Mellen last night,” Wallace said. “He stopped in Winden before he went to the castle.”

“That’s why I’m going there.” Alex raised her horse’s reins, ready to leave.

“Unless you want to help.”

“Help? Do you know who he is?” Wallace put his hat back on his head and tilted it back, glancing at his friends.