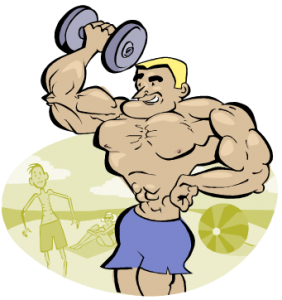 You’ve probably seen studies that show female readers outnumber male readers by a fairly wide margin. I don’t know what the margin is – you think I sit around reading studies all day?

Of course men do read. I don’t know what the scope or methodologies of the studies were, or whether they encompassed such reading materials as appliance instruction manuals and periodicals (ahem). Even so, that doesn’t mean men couldn’t make a better showing.

It seems obvious that part of the problem is the current rating system. I don’t know if you’ve ever looked closely at the current and most widely-used rating system for books, but it breaks down something like this:

Five Stars = I love this book! I want to marry it and have its babies.
Four Stars = This book is great, but I’d never take it home to meet my parents.
Three Stars = It was a nice book. We just didn’t click. It’s not the book – it’s me.
Two Stars = This book was a total jerk. I’m warning all my girlfriends.
One Star =  Ewwww!

I think you can see the problem there. Why even use stars? Why not poodles or hair bows? Manly-men cannot relate to this system of rating. What is needed is an approach that connects with the male psyche – that says what we really feel about the books we read.

So stars are out for the manly-man rating system. We need something more manly. Let’s look at a few choice symbols of manliness:

Hmmm… that’s a pretty impressive list, if I do say so myself. I know, the 1970 Mustang takes up a lot of space when written out, but the little icon would be cool. I’d call Chuck Norris up to ask him, but I’m afraid his steely stare might break my phone, and my plan doesn’t cover replacement for Chuck Norris-related damage. There might be some kind of trademark issue going with some of this stuff, too. Okay, for the present, let’s just use the flaming skulls.

Now that we have our symbol, we still have to assign levels of awesomeness. I think this would work best to see it demonstrated on an actual book. For the demonstration, we’ll use my book, UPGRADE (now available from Amazon in print for the bargain price of $8.99 or for Kindle for just 99¢.)

So, here is how I see the new manly-man rating and review system working on an actual book:

Review by Buck Winchester
UPGRADE is the new definition of awesome. This book eats trees and craps log cabins. If a monster truck and a jet fighter had a baby, it would be this book. This little nerdy dude gets something done to his face by this creepy doctor and even though the guy thinks he looks the same, chicks find him super hot. I wonder if they can do that? That would be cool. This should totally be a movie!

Review by Troy Steeljaw
This book was pretty awesome, considering there were no explosions or car chases. The chicks
seemed really sexy, though. I think some pictures would probably help. The ending blew my mind, man. I was like, “I bet he’s gonna do this,” but he totally did something else. If this was a movie, I would definitely go see it. But they should think about adding some explosions if they make it into a movie.

Review by Mack Linebacker
I agree with some of what has been said about this book. It did have some awesome parts, like that nightmare the dude had. I would have liked to have seen explosions and car chases, or at least some sports.  If they make this into a movie, they should make the main character a boxer or a deep-sea treasure hunter.

Review by Jack Crusher
This book had way too much talk about feelings to get more than two skulls. Sure, the chicks were hot, and it was a neat premise, but what does the geek do with this gift of becoming magically attractive to all women? Does he start a harem? Does he become an international playboy? No, he gets married. He got what he deserved, but it wasn’t enough to redeem the book.

Review by Preston Strongarm
What a wishy-washy little worm this main character was. If you like hand-wringing angst and ambivalence, this is the book for you. I swear I was lactating by the end of this book. I had to go to the gym, the gun range, two strip clubs and a tractor pull just to get my testosterone levels back up.

Yep, I think this system will work. Could somebody please forward me Jeff Bezos’ number?

20 thoughts on “A Reviewing System for Men”