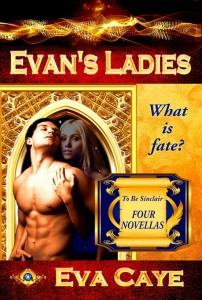 Today we have a sneak peek from the science fiction romance novel by Eva Caye: Evan’s Ladies.

Prince Evan Sinclair, a brilliant stargate scientist, sees his love life soar to incredible heights and plunge to unbelievable depths. Abandoned by tragedy, how will he find a lady who will stay with him forever?

Is true love more than attraction? More than compatibility? More than fascination? More than friendship? From scientist Nicole (The Cremian Dance) to socialite Sara (Good Enough) to sufferer Vivian (Breathe) to stereotype Leah (Treasure Your Words), Evan finds out the hard way, as science, sex, sorrow, solidarity, scandal, sympathy, and sense deprivation characterize this add-on novel to the To Be Sinclair series.

Evan’s Ladies (To Be Sinclair Series) is available from Amazon.com, Smashwords,  Amazon UK, and other retail outlets.

Here is an excerpt from Evan’s Ladies…

After Evan returned from three dances with Siria, Eleanor mentioned, “I saw in the news yesterday you and your brothers will be starting a company called Sinclair Enterprises. What is that about?”

“Well, we have been doing experiments in the Adamov Duchy, which will eventually lead to some developments we won’t make public for several years. So it’s all very secret, yet. But the local wildlife is a plague. We’ve had to exterminate the mooncats in the area because they were interfering with our experiments and we don’t know why.”

“What a damn shame,” Nicole growled with real vehemence, glaring at Evan with an angry set to her jaw. He was so startled he involuntarily took a step back, mouth slightly open.

“Don’t mind her, Your Highness.” Miriam aimed a sneer at her sister. “She’s an environmental scientist. She would be out grubbing about in the wilderness right now if it weren’t for the fact that Mother made her come to the capital this week.”

Evan recovered quickly and offered Nicole a short bow. “My apologies, Lady Nicole. Would you allow me to offer you a dance to make up for my inadvertent slight?”

“No, thank you.” The others gaped at her in astonishment as Nicole sipped and looked down at the table, smothering her ire with a veneer of indifference.

“I can see I actually offended you gravely. I am truly sorry.”

Flustered by either his proximity or his apology, Nicole took a moment before responding. “That’s okay. You couldn’t have known.” She smiled at him wistfully.

Evan noticed all the other ladies leaning in to catch every word over the music. “I would be interested in hearing how you would have solved our mooncat problem. Would you like to go to the bar and discuss it with me?”

After a beat, Nicole smiled. “Yes, I would. Thank you, Your Highness.”

He pulled one of his new code cards from his pocket. A dark, starry background showcased a silver representation of a stargate, with Prince Evan Sinclair, SGS and the graphic scan-only pattern of his vidphone code embossed in silver upon it. “Here is my vidphone code in case anything comes up and you need to contact me, or if you just want to chat.” She reached for it, but he pulled it back slightly. “Ah, this is my private vidphone code. Please keep it safe.”

Aware that her friends were watching, Evan slowly reached out with a seductive smile while checking her face for her reactions, and slipped the card into the sparkly panel of her dress that had been taunting him with a minimal but provocative view of her cleavage all this time. Nicole’s knowing smile at his daring burst into a snicker when he tucked it deep into the right breast panel with two fingers; she laughed outright when he patted it there for safe-keeping.

Shaking her head at his roguish antics, she sailed off toward her friends, who were staring in frozen disbelief.