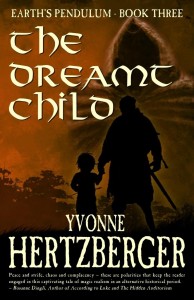 Today we have a sneak peek from The Dreamt Child, the epic fantasy by Yvonne Hertzberger.

Liannis, the goddess Earth’s seer, can no longer deny the meaning of her recurring dream. She must join with (marry) Merrist, her devoted hired man, and bear a child – one with great gifts. Earth has decreed it. But the people resist the changes, bringing danger to the pair and strife to the lands. Both Liannis and Merrist must face tests, sometimes without each other, to fulfil their destiny and bring The Dreamt Child forth into safety. They must succeed if they are to initiate the new era of peace and balance so desperately needed.

The Dreamt Child is available at Amazon.com, Smashwords, Amazon UK, and other online retailers.

Here is an except from The Dreamt Child…

END_OF_DOCUMENT_TOKEN_TO_BE_REPLACED 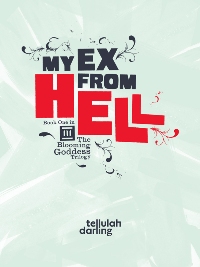 My Ex From Hell (The Blooming Goddess Trilogy Book One)
by Tellulah Darling
Genre: YA romantic comedy/Greek mythology
Word count: 63,000

My Ex From Hell is a YA romantic comedy/Greek mythology smackdown. Love meets comedy with a whole lot of sass in book one of this teen fantasy romance series. Compared to Kai and Sophie, Romeo and Juliet had it easy.

Prior to the Halloween dance, Sophie figures her worst problems involve adolescent theatrics, bitchy teen yoga girls, and being on probation at her boarding school for mouthy behaviour. Then a kiss from bad boy Kai awakens Sophie’s true identity: Persephone, Goddess of Spring.

She’s key to saving humanity in the war between the Underworld and Olympus, target numero uno of Hades and Zeus, and totally screwed. Sophie’s last memory as Persephone was just before someone tried to murder her.

Big picture: master her powers, get her memories back, defeat Persephone’s would be assassin, and save the world. Also, sneak into the Underworld to retrieve stolen property, battle the minions of Hades and Zeus, outwit psycho nymphs, slay a dragon, rescue a classmate, keep from getting her butt expelled from the one place designed to keep her safe …

… and stop kissing Kai, Prince of the Underworld.

This book is available from Amazon and Barnes & Noble. END_OF_DOCUMENT_TOKEN_TO_BE_REPLACED

“Presentation is an important part of elegant dining,” Margo said.

I looked at the stupid little bird made out of some sort of vegetable I’d never eat under any circumstances nestled among other food I didn’t want.

In fact, considering the spread was for my birthday party, there was nothing here I wanted. It was classic Margo. “It’s a goofy-looking little bird. What’s elegant about that?” I grumbled at her.

“It’s whimsical,” she smiled at me, oblivious to my disappointment, as always.

I shrugged in resignation. There was just no winning this kind of discussion with Margo. There would be guests I didn’t want, standing around making small-talk I wasn’t interested in.

At least, I thought that’s how it was going to be. As it turns out, I underestimated Margo.

END_OF_DOCUMENT_TOKEN_TO_BE_REPLACED 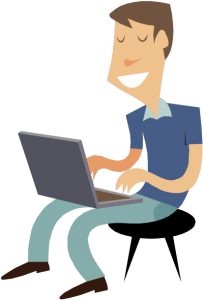 Here are some tips to help you get the most from your book’s feature (and/or guest post). Most of these tips will work for you even if you’re running a feature somewhere else, although we really can’t imagine why you’d choose any site other than Indies Unlimited. With our sick Alexa ranking, it’s clear we’re all that. And a bag of chips. And maybe some dip, too. END_OF_DOCUMENT_TOKEN_TO_BE_REPLACED