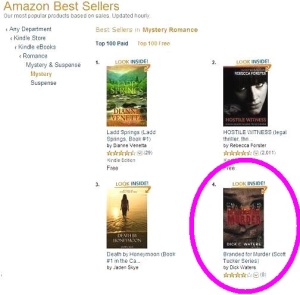 After trying different approaches to market my books using “free” periods on Amazon’s KDP Select program, I finally found some success. When I combined holidays with multiple free books, the result was a large volume of downloads with actual sales following the free period.

In the last three years I have self-published six books. Four are part of my Scott Tucker series which is set back in the 60’s in Boston. However, like most new authors, I have the problem of being discovered. As many know, the KDP Select program allows five free days during any ninety-day period which can be used to bring attention to new authors.

In January, I decided to try a different approach. I wanted to use the New Year’s Day holiday period to catch readers looking to load up all those new readers with reading material. I also considered which books to make free, and decided to make all four books in the series free at the same time. I made my collection of short-stories free too. In addition, I made all five books free for a four-day period encompassing the holiday.

My books were downloaded over seven thousand times during that period. During the four days, three of the books made the top 20 free on Amazon’s Best Sellers in the Mystery Romance category. Branded for Murder, which is the first book in the series, made it as high as #4 on that list. My short-story anthology made it to #6 in the short-story segment on Amazon. That high ranking also increased visibility for the novels, the series and my name.

The real surprise was that actual sales followed that free period. Most of the sales were for the first book in the series.

I wanted to see if I could recreate the success of this strategy and made the same books free again for the Monday holiday known as Washington’s Birthday. I was surprised there were over twelve-hundred downloads worldwide. Once again I was even more surprised that sales followed the free period and exceeded a normal month, and this time most of the sales were focused on the second novel in the series.

Regardless, any sales are rewarding and when reviews accompany them, it does make giving the books away worth it. The objective I’m still working on is to increase awareness of my novels. Hopefully, the word will spread without making the books free, but until sales are much higher on a regular basis, I plan to make the books free over the next holiday period.

As you consider your own strategies, you might want to try this combination to see if it works for you.

29 thoughts on “One Author Has Success with Free Books”