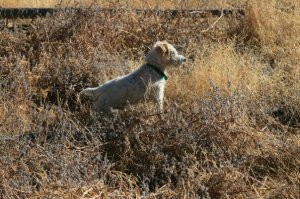 The Adventures of the Cute Assistant
by Chris James

Pish yapped and scampered off over the rough grass. Sure enough, the woman followed.

After some distance, he indicated to her with a yelp. She turned to see a flash of lightning touch the tree they’d just run from. It cracked, split, and fell.

The woman looked back at Pish in amazement. “How did you know?”

Pish wanted to tell her, but that wasn’t his job. For hundreds of millennia and through innumerable hosts, his job had been to observe and teach. His line manager said he was wasting his time. Humans still had too far to evolve, and there were thousands of other planets with species which showed much better prospects. But Pish preferred Earth, and anyway his line manager was light years away.

Large, cold raindrops fell from the leaden sky, so Pish and the woman hurriedly took cover under a mature fir. She put her camera away, grabbed Pish’s head in her hands and cried: “I love you so much!”

Pish gave her a wide-eyed look and licked her face, so the love she gave him would go straight back to her. That was his job: showing lesser-evolved species that love is the most powerful force in the universe.

He knew he’d have to leave her soon enough, move to a different host, and teach another human. But while they were together, they had love. He’d share her joy, ease her pain, and protect her from lightning strikes she couldn’t see coming.