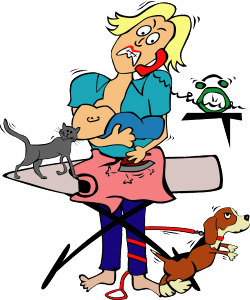 Another little bad habit creeps into a lot of writing, I’ve discovered.  And I always feel a trickle of irritation when I read it.  Those pesky -ing phrases.  You know the ones I mean?

‘Running down the stairs, Lucy opened the front door.’

‘Heading towards the kitchen, Maria made herself a cup of coffee.’

‘Putting his shoes on, James got into his car and drove off.’

‘Pulling up at the gate, David jumped out of the car.’

And there it is  Yep.  I really am wondering about Lucy’s dexterity.  She must have terrifically long arms to be able to reach the front door while she’s hurtling down the stairs.  And Maria…now I really am jealous.  She can ensure her coffee’s made before she’s even got to the kitchen. That’s some skill.   As for James, I sincerely hope he doesn’t have any passengers;  I’m seeing blue flashing lights behind his car as we speak.  That is, after the bobbies have apprehended David for jumping out of the car while it’s in motion.

It’s so easy for a reader to spot these pitfalls, and equally easy for authors to dash them off as they write as they hurry to get the words in their heads down on paper.  The examples above include actions which can’t, in all practicality, be done at the same time.  So…

Lucy ran down the stairs and opened the front door.
Maria headed for the kitchen where she made her coffee.
James put his shoes on before getting into his car and driving off, and
David pulled up at the gate, and then jumped out of the car.

There are of course instances where you can multi-task.

Thinking about her day ahead, Grace made herself a hearty breakfast.   You can think and eat at the same time.

Keeping her hand firmly on the handle, Julia opened the door slowly.

I’m not overly fond of the participle phrase, if I’m honest.  I would prefer if Grace thought about her day ahead while/as she made her breakfast.  However, if it is going to be used, I’d advocate ensuring the action in the phrase can be executed at the same time as the action following it…and…that the subject in that phrase is the same one as in the subsequent part.

This would be better written thus:  the spectators watched the athletes running round the track.

Am I just unlucky to stumble across authors who fall into this trap, or…are any of you going to admit to slipping up from time to time?  You can tell me, you know.  I promise I won’t tell anyone.