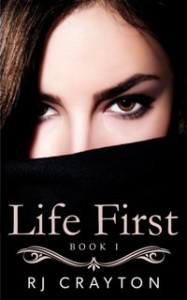 Strong-willed Kelsey Reed must escape tonight or tomorrow her government will take her kidney and give it to someone else.

In this future forged by survivors of pandemics that wiped out 80 percent of the world’s population, life is valued above all else. The mentally ill are sterilized, abortions are illegal and those who refuse to donate an organ when told are sentenced to death.

Determined not to give up her kidney or die, Kelsey enlists the help of her boyfriend Luke and a dodgy doctor to escape. The trio must disable the tracking chip in her arm for her to flee undetected. If they fail, Kelsey will be stripped of everything.

This book is available from Amazon, B&N, and Smashwords.

Dr. Grant treads carefully. “If she showed up, she wouldn’t be charged with fleeing. And then, maybe they could figure out a way she wouldn’t have to do it.” He looks at me tentatively. “Your father is an influential man, and I’ve heard a rumor that the Virginia governor got his cousin off a match list somehow.”

I hold my breath a moment, not sure if this is a real option. My father wants me to do this. If I thought he’d use his sway to get me out of surgery, I would have picked that route first. I shake my head. “My father’s not going to be able to help,” I tell him. “Do you think, if I turn myself in without him, it will still work?”

Dr. Grant purses his lips, and folds his arms across his chest. “Maybe they still might help you. The movement for choice has picked up steam. We could be at a tipping point. Maybe yours would be the case to tip the scales in favor of allowing people to refuse.”

It seems too easy. Are we at a tipping point? Part of me wants to believe that’s possible, that people are beginning to see things my way. Even if people are changing, there are still laws. Saying no and sticking around would put me afoul of those laws. “You think I’d have to go to a short-term holding facility while they decided?” I ask Dr. Grant.

“No,” Luke growls. Dr. Grant and I both turn to face him. “She’s not going into ANY holding facility!”

Luke is adamantly opposed to anything that would put me in or even near a holding facility. I know why, but I’m not sure I agree with him. His father worked in a holding facility his entire career. Luke hates them, believes they are the vilest places on Earth. He views them as if they are prisons. But, they’re not. They got rid of prisons after the pandemics. There were so few criminals, so few people that would do anything to upset the tender balance that tilted things towards life, that they weren’t really needed.

But, over the years, there have been enough bad apples, enough problem souls who committed crimes and owed society a debt. So, we have holding facilities. The smaller crimes require short-term holding facilities. There, people can get some rehabilitation therapy and serve their debt to society through donation of living goods — like blood or tissue or stem cells. The long-term holding facilities are places for the most depraved in society. They hold those sentenced to death. Not some purposeless killing, but death by giving life — a heart, lungs, liver, both kidneys, whatever a person who truly believes in Life First needs.

“Maybe he’s right, Luke,” I say, a tinge of hope in my voice. “Maybe, if I go willingly, there might be an opportunity for me to escape.”

“No one’s ever escaped from a holding facility,” Luke spits. Then he pauses, reconsiders. “At least, not the way you mean.”