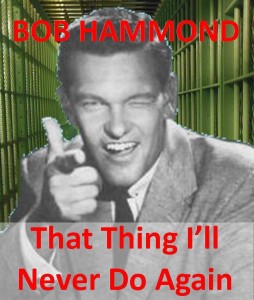 Sometimes it’s worth doing something just so you can say, “Been there, done that,” to know-it-alls. Well, I can now say I’ve been there: I made a site for indie authors, and I live to tell the tale. And, when it comes to paying it forward, I’ve now done that. It was the longest two weeks of my life, let me tell you.

I see the shock on your faces. Yes, two weeks. That’s fourteen days and a lot of hours of my life that I’ll never get back. But if I helped one indie author during the process, it was worth it.

I learned a number of things while running that free resource site for indies. Yes, I know, that’s amazing, isn’t it? Because you figured that I, Bob Hammond, pretty much already knew everything there is to know. Well, little indies, part of being awesome is having an open mind. And my mind is like a sponge, soaking up more awesomeness every day.

You can read about my experience running a site for indies in detail in my new book:That Thing I’ll Never Do Again. You’ll be riveted to each word, including the ones in these chapters:

Oh, right. That last chapter – that’s not about me. That’s about a guy I know who told me about a guy he knows who had a sister that happened to.

So fork down some dough and check out my harrowing tale of running a site for indies: That Thing I’ll Never Do Again. And hence, I shall hand the free-indie-site-running-schtick back to the folks at Undies Unlimited. Now I know why they sit around in their underwear.