My good friend and fellow author K.S. Brooks just received some fantastic news. Her book The Kiss of Night is up for a Book Cover of the YEAR award.

YOU can help her win this prestigious award by  going to this page and on the right, scroll down just a little bit and place your vote for #5 and click Vote!

So, go already! What are you still loafing around here for?

Four up-and-coming designers from across the internet came together to raise funds and awareness for the homeless and at-risk population of Southern California. Proceeds benefit L.A. Mission, serving Southern California for 75 years. The book is available from Smashwords and Amazon. Here is the front cover: END_OF_DOCUMENT_TOKEN_TO_BE_REPLACED 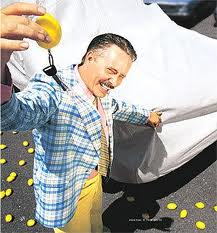 A couple of my author friends have related stories to me about book signings that didn’t go well at all. To say they didn’t go well is an understatement. They stank on ice—they were death on a stick. I feel for these authors. They basically killed an afternoon, sitting there at their table full of books and people were walking around them like they were girls with herpes sores running a kissing booth.

Now, I have personally never held a book signing, but that doesn’t mean I don’t know absolutely everything of value about it. Trust me, I’ve been an armchair quarterback for years, and it’s a well-known fact in my mind that if the Oakland Raiders had listened to me, they would have won every single Superbowl since the seventies. Yeah, I know they won a few in there. They got lucky. Shut up. END_OF_DOCUMENT_TOKEN_TO_BE_REPLACED