The man came into the border town at dawn.  He sat tall in his saddle, and he was a tall man.  A handful of inches over six feet, but slim and wiry.  He was some dirty, and a week’s worth of stubble smudged his rawboned face.  Behind him, the desert heat was building and the red sun was rising like a phoenix.  It had been a hard ride, but Thane Johnson was a man used to hardship.

Kristen says she has always been passionate about stories and took up writing at a young age. Many of her early novels, back in middle school, were actually rewrites of her  favorite movies. “Of course I didn’t see that until later on! I rewrote The Swiss Family Robinson into The Island Tribe, a story about kids. I began getting published in 2005, first in a short story journal out of Australia called Skive and then a small press in Canada called Lachesis Publishing. Around that time, I joined the self publishing bandwagon and found I enjoy designing the book along with writing it. My books are mainly romance with other genres thrown in,” she says.

Kristen’s describes her writing style as conversational with vivid descriptions and characters that draw in the reader. She says most of her reviews mention how much the reader liked the characters and the mystery element in her romances. “Several things might set my novels apart such how I use Oregon and the beauty here, the warm characters, and my dialogue. I’ve gotten quite a few compliments on that.” END_OF_DOCUMENT_TOKEN_TO_BE_REPLACED 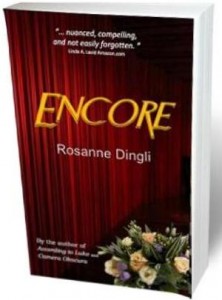 Just in time for the festive holiday season, Goodreads is hosting a giveaway for Rosanne Dingli’s brand new story collection, Encore. Two paperback copies are up for grabs. Enter free at Goodreads!   Make sure to get your entry in by December 31st!

All the stories in Encore are loosely themed around music. Music can soothe, excite, gladden or console. It gives a special edge to fiction intended for readers who are not exactly sixteen: young at heart, perhaps, but enjoying second-time love.

So head on over to Goodreads and enter to win a copy of Rosanne Dingli’s Encore!

I just read an article at Health.com that named writing as one of the top 10 professions in which people are most likely to suffer from depression. Of course that wasn’t a surprise. Writer friends and I have had many conversations about our tribe’s tendency toward suffering mental illness, and offing ourselves with rather disturbing frequency. Virginia Woolf, Ernest Hemingway, Anne Sexton and of course Sylvia Plath are some of the best known examples.

Though the article didn’t teach me anything new – the “what” was old news – it did make me wonder about the “why.” I decided to do a little research. I found an article on the subject of depression by novelist Simon Brett. One of the things he said was, “Many writers are introverted, quiet people, and find it stressful to have their work assessed publicly. Now there are reviews on Amazon, for example, so that happens even more.” END_OF_DOCUMENT_TOKEN_TO_BE_REPLACED