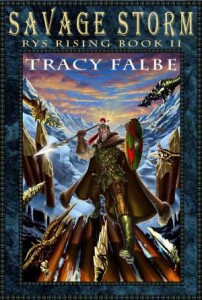 When Onja enthralls the savage Chatapaka people of the remote north and unleashes their brutal hordes upon vulnerable Nufalese settlements, the militia is overwhelmed. Cruce Chenomet and his comrades struggle to save the fleeing settlers. Cruce quickly loses hope but keeps his courage as he confronts the savage storm.

Savage Storm: Rys Rising Book II by Tracy Falbe is available for Kindle on Amazon.com, for Nook on BN.com, and on Smashwords.

“Enough of this,” Moto declared. “Our tongues go in circles. If your rys is so powerful and you are her messenger, then her power will let you pass a test that I would put to you. If you pass, I will grant my hunters leave to volunteer for you if they wish.”

Amar listened carefully to the translation, and his eyes lit up. This was progress.

“Will you face my test?” Moto goaded.

Amar naturally wanted to ask what the test was, but such quibbling hesitation would show weakness. “Of course,” he answered.

Moto looked over his shoulder at the hunters seated behind him. A tall man rose like a bear out of a berry patch. The thick muscles upon his long frame looked as hard and smooth as the granite upon which he stood.

“Only the spirits can help you against Bifolomo,” Moto said gleefully as his magnificent hunter moved forward. He looked like he could wrestle an elk to the ground. His eyes sparkled with wolfish intensity as he eyed the outlaw born under a roof.

The onset of danger thrilled along Amar’s nerves. He should have expected trial by combat from these primitive people and he embraced the mad freedom of the struggle. The life and death contest made everything simple and he deemed Moto a wise Elder indeed. Amar nodded respectfully to the bent Elder whose solution saved many arguments and much time. Amar would either live and gain glory, or an overdue fate would claim him and he would die.

Bifolomo approached with a similar enthusiasm. He imagined how his people would be entertained for generations with the telling of how he twisted off the head of the Kez Overlord. Cries of delight erupted from the crowd once the Kelsurs realized what was happening. People pressed closer to the council circle, packing themselves into a dense mass of flesh hungry for violence. As the name of their champion circulated, the chant of “Bifolomo! Bifolomo!” grew and the remote hills throbbed with bloodlust.

Amar saw alarm in Loxane’s eyes, but he waved her back. Kym flashed him a quick hand signal saying he would protect him, but Amar shook his head. He had to win this on his own.

“Moto!” Amar shouted as Bifolomo advanced. “If I die, grant my brothers safe passage to the Thievesmeet.”

Waiting for Moto to hear Kopok’s translation, Amar retreated a few steps as the grinning Bifolomo confronted him. Once the towering Kelsur hunter heard the question, he paused to await his master’s answer perhaps out of simple politeness.

Moto replied and Kopok said, “Lord Amar, he said we will go free, but we can’t have your body. Your skull is a trophy too fine to sacrifice.”

Not liking the image of his skull on the staff of the Man Hunters, Amar muttered, “Fair enough,” and then focused entirely on his opponent.[subscribe2]