Until I began writing I didn’t realize that I spoke in commas. Commas allow me to link the disparate thoughts in my head and confuse my husband who doesn’t know exactly when he can join the conversation.  I also love to sprinkle commas liberally throughout whatever I write, using their pleasing curves at will. Editors love me.

I should never have been possessed by this obsession. I was inoculated religiously in Catholic school to understand the judicious use of commas. Sister Leo Veronica was the punctuation warden, the veiled mistress of the comma, and we students bent to her will. How disappointed she would be to see the level I’ve descended to. How shocked and scandalized to witness my obsession with the comma’s seductive shape! END_OF_DOCUMENT_TOKEN_TO_BE_REPLACED 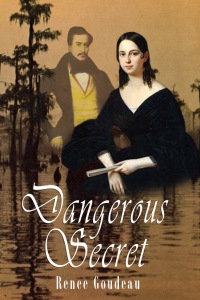 Today we have a sneak peek of Renee Goudeau’s historical novel, Dangerous Secret:

In 1922, a time when Jim Crow and its offshoot, the One-Drop Law, are at their height, a dangerous secret from the past rises like a cottonmouth to strike in the present. In Lake Badin, Louisiana, Odette Montagne Grandpierre discovers just how dangerous the secret is. Threatened with blackmail for her “one drop” of black blood, faced with losing her lifelong identify, being stigmatized as a member of a disdained race and stripped of her civil rights, she decides her only way out is to murder her tormentor. But she can’t follow through with it. When her niece by marriage, Giselle Richards O’Connell, discovers the blackmail and the jeopardy in which it places Odette, she takes up the cudgels in Odette’s defense. Using her weekly newspaper column Giselle tries to fight fire with fire—never dreaming that she, herself, will be caught in the firestorm she creates.

Dangerous Secret is available in print and for Kindle on Amazon.com. END_OF_DOCUMENT_TOKEN_TO_BE_REPLACED

I’ve been honored a number of times to participate in a Novel Writing Contest as a Top Tier Judge. During those contests, I’ve seen a lot of manuscripts. Some showed good promise and strong writing skills. Others made me want to stab myself repeatedly rather than read further. In most cases, these authors all made the same mistakes, the most common of which I’ve listed below.

A good editor would pick up on these bad habits. If you don’t have the luxury of hiring an editor, then you should pay special care to avoiding the list below. (Even if you do hire an editor, avoiding these pitfalls will make their job easier.) And now, in no particular order, I present to you the “Most Common Manuscript Mistakes.” END_OF_DOCUMENT_TOKEN_TO_BE_REPLACED

As writers, words are our currency, an unfortunate term perhaps, considering so few of us can actually eke out a living with them.

Yesterday, on LinkedIn a few of us pondered the correct way to spell a word. (wet-stone, whetstone, wetstone – you get the idea). That was fun and got me thinking about words. I remembered my grade eleven English class. Our assignment was to write a short story. I wrote one I was proud of. It had great characters, a gripping plot and lots of tension. Even the setting added to the tone. Now, I liked that teacher, respected her. And she gave me a good mark, 80% I think. Her only critique was that my prose was “terse”. I was crushed. One single-syllable word and nothing else mattered. END_OF_DOCUMENT_TOKEN_TO_BE_REPLACED