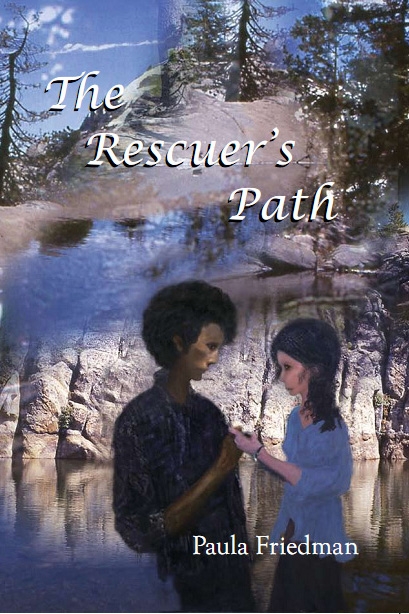 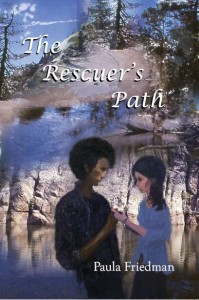 Today we have a sneak peek from Paula Friedman’s historical/young adult novel, The Rescuer’s Path:

In 1971, Malca Bernovski, a Holocaust survivor’s daughter, goes horseback riding and discovers wounded antiwar leader and terrorist suspect Gavin Hareen. She aids him, and trust builds between them, becoming love. They flee cross-country, but FBI pursuit closes in; shielding Malca, Gavin is fatally shot. Bereft, Malca yields their baby at birth for adoption.

Thirty years later, that daughter finds Malca; in reuniting, each can let go of past loss.

The Rescuer’s Path is available on Amazon.com

And now, from The Rescuer’s Path…

Malca and her beloved Gavin, the half-Arab peace activist suspected in the lethal bombing of an army truck, have taken refuge in the Rocky Mountains from the FBI pursuit. Not long after midnight, Malca wakens.

“We are together?” She said the words too quietly, coming up from the silent happiness, trying to quell the new fear, unforeseen.

He turned in the sleeping bag and pulled her close; they rocked each other. She had really been asking—they both knew it—that other universe. The world of fragile blessings. Like babies, they breathed together.

“Shhsh.” He sat up in the pitch-dark tent. Outside, there had been, perhaps, a sound. Like a little cat possibly, or a coyote, over by the boulders near the firepit. “Cougar?” she whispered—she’d been wanting to see one—and then she also heard it. But on the other side.

Gavin was slipping her shirt onto her, faster than she thought possible, and silently he was pulling on his jeans. Trembling, she began to slide into hers. He leaned over toward their boots.

And stopped. Everything stopped—only his sigh. All around them, tiny snaps and muffled crunches and other, stealthier sounds were approaching from behind the boulders, coming out of the dark pines. There wasn’t anywhere to go.

“We’d best not scare them, then,” he said. She reached for him. His face, shrouded by the darkness, felt haggard, like an old man’s. He squeezed her close, and breathed against her hair and touched her cheek, and for an instant they clung, hearts beating. Then together they opened the flap in the side of the tent.

Her eyes found Gavin’s, black and clear as the predawn stillness, to her right. Their hands were clasped. And to her left, out of the very corner of her vision, something, a heavy glinting thing, was lowering—the muzzle of a rifle, maybe eight feet away. In front and to the right, guns pointed, cocked and senseless, at their heads. The rifle made a clicking sound as its safety was released.

3 thoughts on “Sneak Peek: The Rescuer’s Path by Paula Friedman”