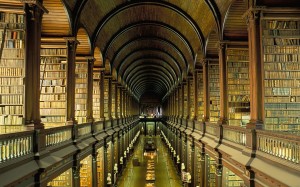 The Library of Congress in Washington, DC has 838 miles of bookshelves and over 30 million books. Thirty million. Actual physical paper printed with words. In the Old Library at Trinity College in Dublin, there are 200,000 books that date back hundreds of years or more. They can’t be opened because of their age and many of the authors are now long forgotten, but if you stand in the middle of the room and stare a while, it is easy to believe that every meaningful thought in history originated somewhere within those volumes. Until you read about the ancient Library of Alexandria in Egypt that was started in 200 BC, held 700,000 scrolls, and was around for six centuries.

It’s enough to make a person stop writing. I mean, have you ever gone into just a regular bookstore or city library and been overwhelmed by all of those stories? Have you thought to yourself, not only will no one person ever be able to read all those books in a lifetime, but what do I possibly have to add that hasn’t already been said? I certainly have. I don’t know if such thoughts are humility or hubris, because here is the reality: You are not going to be the first person in the history of the universe to make any observation about the heart of people, I don’t care how profound it is. You probably won’t even be the first one to write it on paper. Sorry, that’s just the downside of coming along thousands of years later than the dawn of humanity. On the upside, most people now wear deodorant, so all in all, it’s a fair trade.

Was Socrates the first person to ask questions to help people reach an answer? Probably not. He was, however, the first one to evoke a visceral reaction to it so strong that he was sentenced to death. Sometimes it’s all in the delivery. Just because Shakespeare’s plays contain every essential conflict known to man, it doesn’t mean he was the first person to tell a story in which someone sacrifices himself for love or kills a family member for jealousy; the Bible has those plotlines. But Shakespeare came along and wrote them as entertainment that could reach a modern audience.

From the perspective of a creator, human beings with a head, a body, two arms, and two legs have been born a hundred billion times. People with brown eyes, black hair, and 30 teeth have been done ad nauseum. Humor, intelligence, and caring—done, done, and done. So, what is the point in creating people at all when every type has been drawn and redrawn for thousands of years? Because there is an infinite combination of traits, thoughts, emotions, situations, landscapes, motives, personal perspectives, reactions, and chain reactions that make every person in every moment of time unique.

Characters are just people we create. In the course of entertaining, they can influence how a reader thinks and feels, even without meaning to. So, sure, your story will have elements similar to a hundred other stories throughout time, and the crux of your observations will be ancient history, but that’s not the whole of the work. It is the combination of elements and observations and details that you have made particular to those characters and that story, told as only you can tell them, and interpreted by the reader in his or her own context that have the potential to create a Moment–a first, even in the history of the universe.

14 thoughts on “Everything Worth Saying Has Already Been Said”