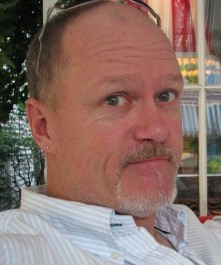 Bill Fitzhugh is another of my favorites who should be far better known and appreciated. And I’m far from the only one who feels that way. Maybe not quite a “cult” author, Fitzhugh decidedly commands a “niche” of rabid fans. Carl Hiaasen and Tim Courtney are among them: in fact if you ask any star of funny crime novels who they read, he’ll on their short list. If you doubt me, take a look at his website.

His humor is different from those two–and from anybody else–with a unique, rustly dryness about it. His criminals are folks like you and I who get caught up in something too awful to come to grips with and too quirky to cope with. He’s also a long-time DJ and major record collector, so music figures heavily in his books, including titles like “Highway 61 Resurfaced.” One of my favorite lines is when evil exterminators are cruising Manhattan one asks their guide if he’s sure they’re on the right street and he answers, “Positively, Fourth Street.” If you laughed, or even know why that’s funny, you should enlist in the Fitzhugh cult right away. Besides, he graduated from my own alma mater, U. of Washington. Go Huskies!

He’s a trove of great books waiting to be discovered. Made easier by their recent re-emergence on an independent press, crime specialists Poisoned Pen Press. Books that were hailed on Morrow and Harper are now back around as ebooks. Better yet, there one of those “long awaited sequels.” If there is one of his titles that made the fans most rabid, it had to be “Pest Control”, a wicked bit of fun and menace that’s probably the most-read book about exterminators since “Naked Lunch.” And now there’s “The Exterminators”, wrapping Bob Dillon and the assassin bugs up with far right, far left, drug money, Hollywood, DNA glitches, and post-9/11 “security” mentality.

If you like Hiaasen, Donald Westlake, Kinky Friedman, or Jimmy Buffett you would find Bill Fitzhugh a very rewarding companion.

I’ll confess to some major nip/tuck on Bill’s “tip”: he could write a book on being grumpy and curmudgeonly (if he hasn’t already). So I pared it down to some kernels I feel are actually very helpful, though maybe not in a way you’ll like.

A good example was his first tip, given in a facetious, tongue-in-cheek spirit, but those who’ve been up against making a living in the arts immediately realize it’s far, far more important than anybody wants to admit. He just doesn’t say how to do it. The tip: If you want to write novels, marry well.

His second tip resonates what Thomas Perry told us last month: there’s no magic beans, and it’s worth getting that in our heads. But I’d suggest that you do a very careful read of the second paragraph. It’s about as global as it gets, and something all writers should know, though many don’t want to and the whole “writer aid” industry would be happy to suppress.

Unlike a cookbook which will allow someone who has never been in a kitchen to read some instructions and end up with a perfectly good roasted chicken, there is not a book on earth that can tell you how to gather certain ingredients (story, character, and plot) and put them together in a certain way in order to end up with a good mystery novel or a thriller or a romance novel or a Booker Prize winner.

So here’s a tip: don’t look for shortcuts.

I think you need an aptitude for whatever you do, if you want to do it well. I do not have an aptitude for numbers so I’ll never be a particularly good engineer. This applies to writing as well as anything. Try to be aware of this. So here’s another tip: Know what’s in your wheelhouse. I could take a hundred college courses on poetry and still never become a poet. I lack the aptitude. Ditto the literary novel. Not in my wheelhouse. I know my limitations. And instead of wasting time trying to become less bad at what you’re no good at; I think you are better off polishing the skills you have. Michael Jordan was perhaps the world’s best basketball player, one of the world’s best athletes, but that didn’t translate to baseball. Imagine how his athleticism would have translated to hockey. It wouldn’t. And not because he’s not athletic. I’d suggest it was because he had an aptitude for basketball and that he put in the 10,000 hours to polish the skills.

One last tip: Don’t listen to a word I say.

Learn more about Bill and his writing at his website and his Amazon author page.

2 thoughts on “Tips From the Masters: Bill Fitzhugh”