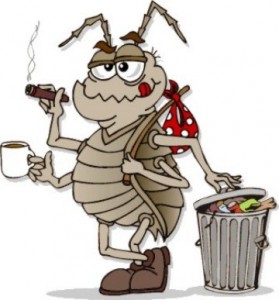 “I believe that once we are all gone, Keith Richards will still be here… with five cockroaches saying ‘you know I smoked your uncle, did you know that?'” – Robin Williams

My last author blog post on Indies Unlimited was about being born and raised in the state of New Jersey.

I truly love living in my adopted state of Florida, and as I read the comments from my readers I decided to write about one of my first Floridian encounters with the king of Darwinian theory, the American Cockroach.

There are thousands of types of cockroaches. The oldest cockroach fossil dates back 350 million years. It is believed that our modern day pests are quite similar to their ancestors.

The first time I ever saw a cockroach was in Newark Airport as an adult. The cold northern winters kill off most of the bigger specimens. I was raised to believe that if you had cockroaches you were a poor housekeeper. In the south this is not necessarily the case. Without a freezing winter to kill them off these hardy insects thrive and grow to spectacular sizes.

When we moved to Florida we lived in a ground floor apartment. I was pregnant and expanding rapidly, so I was thrilled to avoid the steep stairs of the second floor residences. One night, or perhaps early in the morning, I needed to use the bathroom that was close by our bedroom. As I sat, a huge cockroach, at least four inches long, ran across the wall and hid behind the hand towels. I screamed bloody murder and my husband ran in to investigate. He tried to whack the intruder, but he was a speedy devil. (A cockroach can run up to three miles per hour and turn 25 times in one second. The best way to stop them is Windex, but that is another story.) He streaked across the wall and disappeared. My husband looked all over the bathroom for him, and finally gave up.

“He’s gone, Honey. I’m going back to bed, I have to work tomorrow.”

I knew better. An insect doesn’t get that big by being stupid. His impressive size was a testament to his superior survival skills. He was here, oh yes, and I would get him. The adrenaline coursed through my body and I was the hunter. I needed to think like a cockroach, nay, I must become a cockroach. Only by putting myself in his cerci would I defeat my enemy.

I surveyed the bathroom. He was not near the ceiling, nor was he anywhere at eye level. I turned slowly, a full 360 degrees, taking one final look before I slowly rested my Buddha-bellied body on the throw rug. That is when I saw him. The crafty son of a gun had flattened his body upside down under the lip of the countertop by the sink. Nonchalantly I turned my back to him, (cockroaches have a nerve that runs down their back allowing them to sense danger from behind), rolled up a magazine, and launched my attack. I whacked three times under the counter with the fashion magazine, my stylish weapon of choice. His mutilated carcass fell to the floor and I felt the surge of military success. Victory was mine! Finally, I could sleep. The only collateral damage was the ruined Vogue.

As I remember this encounter I will admit how much I like the idea of giving animals, reptiles, and insects human characteristics, personalities, and well-honed survival instincts. On Indies Unlimited a recent flash fiction challenge required the writer to imagine an unassuming turtle that caused radioactive aging. You can read the entries HERE. This was my first foray into a writing challenge of this sort. It is a very helpful exercise in parsing one’s words, much like writing a book synopsis.

Are there books where cockroaches are the main character? I am familiar with Kafka’s “The Metamorphosis”. With all due respect, I am more interested in reading a humorous or science fiction story. In the movie Men in Black I always thought the bug was a brilliant addition to the plot line. “Put the sugar in the water.”  Hilarious.

I am fascinated with the idea of a story where the main character encounters a bug or an insect that gives him a run for his money. I would love to read a tale where a bug, like the gopher in Caddy Shack, dances to Kenny Loggins. Now that would be funny.

20 thoughts on “The Cockroach Games”