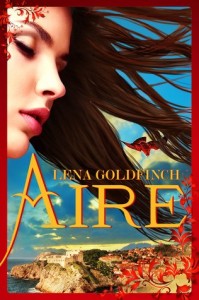 Principessa Annalisia is stunned and conscience-stricken when an unknown enemy mistakenly abducts her maidservant. Determined to find the girl, Annalisia disguises herself as plain Anna and slips away from the palace.

She tracks down Jovanni, her maidservant’s daring older brother, and they soon begin to search together. As they uncover clues, Anna also discovers a kindred spirit in Jovanni. But would he be so free with her if he knew who she really was? Doubtful. Even so, she reveals her secret gift of visions to him, and in so doing disobeys the orders of her beloved grandmother, the queen.

With Jovanni, Anna can almost imagine she’s like any other seventeen year old girl, free to pursue the longings of her heart. When she learns that he also has a secret—he’s a sentinel, an ancient shapeshifter who can take the form of a falcon—it seems as if they were destined to be together, as in the legends of il Sentiro. Though Anna is tempted to wish otherwise, she can’t forget that she’s a princess and it’s her duty to marry another. Meanwhile, their hunt leads Anna ever closer to danger, for she herself is being hunted.

A princess and a commoner. They never should have fallen in love…but they did.

Lena, how did you come up with the title for your book? Does it have any special meaning?
In the story, aire is an ancient word to describe a premonition, the stirring if the spirit. It relates to the main character, Annalisia, who has the gift of visions and has a premonition of cold before one of her visions. Jovanni can become a falcon, so there’s a connection there to “air” and sky. Also, I just like the way it sounds. 😉 It’s light and airy. AIRE is a very romantic story, even though there’s quite a bit of intrigue, and I hope the title coveys that.

Who was your favorite character and why?
Oh gosh, that’s tough! I love Annalisia & Ilan, but I have to say I love Jovanni the most. His character is such a wonderful combination of recklessness and responsibility. Plus, he can turn into a falcon, which is so very cool. 😉

Does your book have any underlying theme, message, or moral?
We all have gifts or talents, not supernatural abilities like Annalisia or Jovanni (please contact me immediately if you do! ;)), but we have something. We find fulfillment and purpose in discovering ways to use our gifts. We sometimes have conflicting loyalties too and have to make tough make choices.

What would/could a reader or reviewer say about this book that shows they “get” you as an author?
Lena is a romantic soul who cares an awful lot about language, character, and story.

Give us an excerpted quote from your favorite review of this book:
“Aire is a lyrical, magical, sensitive, romantic, and thrilling fantasy. Lena Goldfinch walks a fine line between tense action, political intrigue, and heart-thumping romance.”

Where can people learn more about your writing?
http://www.LenaGoldfinch.com

6 thoughts on “AIRE, by Lena Goldfinch”